Tokyo Paralympics has been a triumph and success 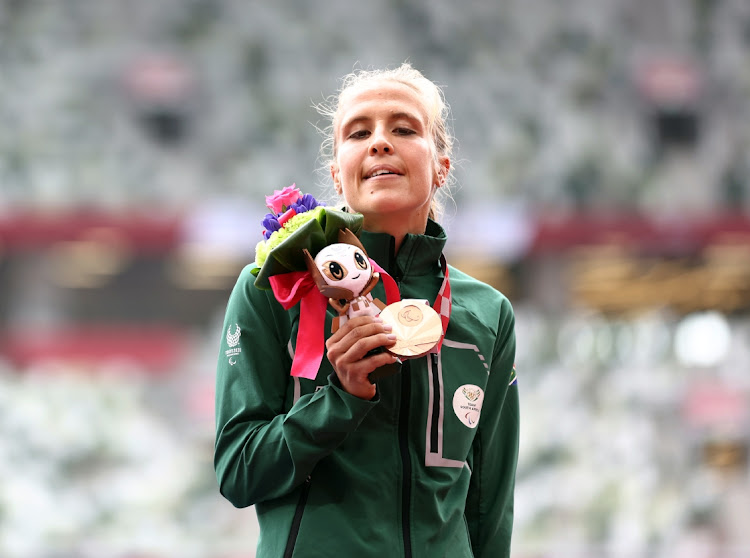 SA’s Tokyo Paralympics ended with bronze, a fitting climax and a nod to the triumph and success these Games have been during a time of uncertainty and fear, a few weeks, a moment, to be grateful and to recognise the ability to adapt and overcome.

Louzanne Coetzee’s third place in the marathon, the final event of Tokyo 2020, took SA's medal tally to seven, with four gold, one silver and two bronze. It came in the wee hours when Africa was sleeping, and it came with determination and drive, a push in the final 30km that saw the visually impaired Coetzee and her guide, Claus Kempen, move from fifth to third and finish in three hours 11 minutes and 13 seconds.

Shortly after, Coetzee was announced as SA’s flag bearer at the closing ceremony. She was one of the few of the team left in the village, Covid-19 protocols having seen a staggered and constant departing of the team.

On Monday, Ntando Mahlangu and Anrune Weyers, who won three gold medals, will land at OR Tambo via Ethiopia. Most of the team are already home, with Pieter du Preez, the gold medallist in the time trial for hand cycling, getting a royal welcome home from neighbours who lined the streets around his house.

Coetzee should steel herself to expect the same. Two medals in two very different events is an extraordinary achievement, one to match the three golds by Hilton Langenhoven in Beijing in 2008, when the visually impaired athlete took gold in the 200m, long jump and pentathlon.

“We were in fifth place for a long way and it was never in my head to move into third,” said  Coetzee. “But, I’ve been blessed. A world record in my class, a PB and a medal. I can’t ask for more. I’ve run a couple of bad marathons in the past but this was perfect. I’m not going to run another one tomorrow [laughs], but I’ve been busy with this sport for eight years and I’ve waited that long, makes it a more special one for me."

“At the 30km mark we moved up into third and it was wonderful how strong Louzanne was,” said Kempen. “With 12km to go the race really began and with 8km to go I was telling Louzanne that we mustn’t kick for home too early,” said Kempen. “Our aim was for her to run a personal best. To do that, plus the world record, plus the medal…it’s the longest Park Run I have ever done.”

It was the end to a Games that has been an accomplishment to just put on as much as it has been an accomplishment for the athletes to compete. SA came in with a smaller team and, perhaps, lower expectations than before. They have been a revelation at the Games since 1992, producing superstars such as Natalie du Toit and Oscar Pistorius, but the world of disabled sport has moved on as have the standards and world records.

Who were the SA stars? First up, double amputee Mahlangu, at 19, is already in his second Paralympics. Two gold medals, the first, in the long jump, won spectacularly on his last jump with a world record. The second, in the 200m, against Richard Whitehead, the 45-year-old Brit and defending champion, who showed class in handing over the guard to his young SA rival.

Weyers bowed out with gold in the 400m after three Games. Sheryl James muscled her way to bronze in the 400m for those with cerebral palsy.

In Paris, watch for Mpumelelo Mhlongo in the 200m. Not to mention the 16-year-old Puseletso Mabote, who lost his leg after being struck by a truck when he was five. He was seventh in his 100m final. “I’ll get them in Paris 2024,” he promised.

Coetzee joked that she hoped her guide would not cramp up due to fatigue during the closing ceremony. The Games are done, the medals handed over and the four-five-year-cycle done. Paris in 2024 is a short jab away. The world should be a different place by then in terms of the pandemic. It may be the same place for the disabled, for the 15% of this world.

Day 11 wrap of the Paralympics: Team SA bids farewell to stalwarts and gives glimpses of the future

As the SA Paralympic team rolled, ran, jumped and threw themselves into what was all but the last day of competition of the Tokyo Games, they bade ...
Sport
2 months ago

With a high-stepping, long-kicking display of perpetual motion on Friday, Ntando Mahlangu won his second gold of the Tokyo with a pair of prosthetics ...
Sport
2 months ago

South African umpire Patrick Selepe has become the first person with a disability to serve as an official at a Paralympic Wheelchair Tennis Event.
Sport
2 months ago