'I couldn’t have asked for a better race, a better guide, better preparation' 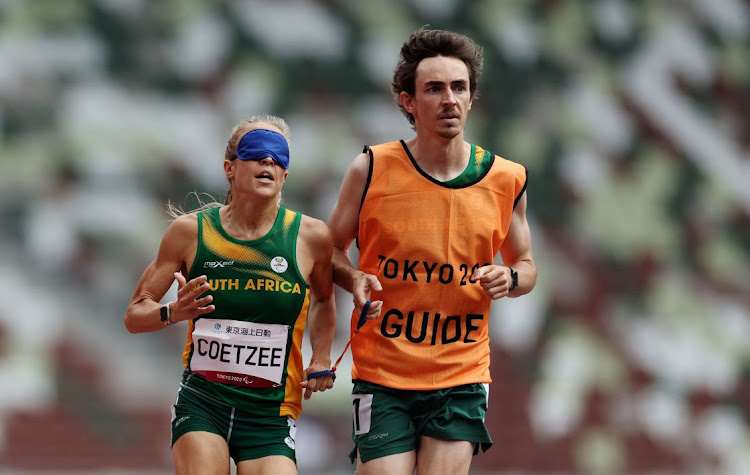 Louzanne Coetzee, the Rose of Bloemfontein, was “overwhelmed” at getting the Paralympic medal she had hoped for five years ago, when she took silver in the 1 500m at the Tokyo Games yesterday.

“I can’t believe it,” said Coetzee, who was born blind. “I have been competing for eight years and this is my first medal. I’m just overwhelmed. I couldn’t have asked for a better race, a better guide, better preparation. I’m just very thankful for how everything went down.”

There was a shock for the SA team when wheelchair tennis star Kgothatso Montjane, the sixth seed in the singles, went out in straight sets (6-2 6-3) to Ziying Wang of China. Montjane, who had made the Wimbledon final earlier this year, was expected to be a strong contender for a medal for the SA team.

Coetzee and her guide Estean Badenhorst were second, three-and-a-half seconds behind world champion Monica Rodriguez Saavedra of Mexico, who broke the world record with a blistering time of 4:37.40. Coetzee looked to have been saving a little in the tank for the final, run on yet another hot, muggy morning at the Tokyo Olympic Stadium. The 28-year-old went nine seconds faster than her heat, running a personal best of 4:40.96.

Coetzee's tears told of the disappointment of her last Paralympics, when she was disqualified in the 1 500m when her guide Khothatso Mokone was deemed to have given her illegal assistance when he passed in front of her while overtaking another athlete.

“Khothatso turned his shoulder towards me when he was speaking to me and from the video on the referees’ side, it looked like he was pulling me,” remembered Coetzee. “Nobody wanted to appeal and help me appeal. If I had gone and appealed confidently, we could've won the appeal. So, I’ve learnt that if you believe in something, go for it. I won’t let that happen to me ever again. It wasn’t a great place to learn that at, but I’m glad I gained that experience. I think if I didn’t run that race and get disqualified, I wouldn’t have gained the experience I got.”

Also yesterday, Dyan Buis got over his disappointment of missing out on the 100m final but gave himself a big shot at defending the 400m title he won in Rio, by qualifying second fastest for today’s final.

Mpumelelo Mhlongo, who has reduced function in his legs, finished a strong fifth in the combined 100m class, breaking the Paralympic record for his class with a time of  11.03, just behind Johnnie Peacock, the double Paralympic champion from Rio and London.

Puseletso Mabote had to have his right leg amputated above the knee when he was five has and has shown that at 16 he is one for the future with a seventh place finish in his 100m final. “I’ll get them in Paris 2024,” he said.

There were many people Ntando Mahlangu wanted to thank for his gold medal in the long jump on Saturday night, but he took the time to pay a special ...
Sport
2 months ago

Louzanne Coetzee, the Rose of Bloemfontein, was “overwhelmed” at getting the Paralympic medal she had hoped for five years ago when she took silver ...
Sport
2 months ago

Day three came and went without a medal for South Africa in sweltering temperatures at the Tokyo Paralympics‚ but records were broken‚ personal bests ...
Sport
3 months ago
Next Article