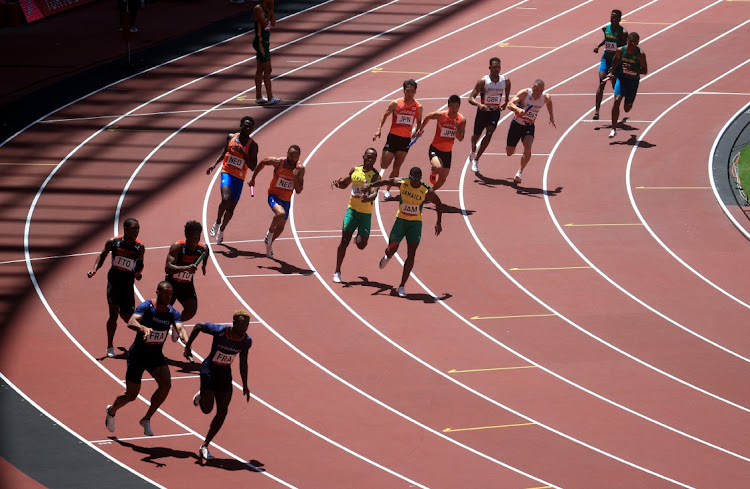 SA's Chederick van Wyk stands motionless after his team had crashed out at the first handover in the 4x100m relay heats at the Tokyo Olympics.
Image: Hannah Mckay

The SA 4x100m relay team promised so much, but delivered little at the Olympic Games in Tokyo, Japan.

Many believed that the relay team stood a better chance of winning a medal than the individual events.

They arrived in Tokyo high on confidence with the sprinters on form, but they bowed out shockingly when they committed a schoolboy error on a big stage at the Olympic Stadium yesterday.

The SA men's quartet of Clarence Munyai, Shaun Maswanganyi, Chederick van Wyk, and Akani Simbine did not finish their heat because of a dropped baton.

Maswanganyi and Munyai failed to exchange the baton and made a mess of it and as a result, the team did not finish the race.

They were supposed to make the final against Jamaica, Great Britain, and Japan, but what transpired embarrassed the country.

Maswanganyi and Munyai failed to exchange the baton and messed up the race for SA, leading to an automatic elimination.

Athletics SA (ASA) went out of its way to prepare the relay teams with camps in Tshwane and Italy, but the outcome of the Olympic Games is disappointing.

Maswanganyi owned up to his mistake that cost the team a place in the final.

The 20-year-old US-based sprinter was not part of the training camp in Pretoria and Italy.

Maswanganyi was not part of the relay team that won the gold medal at the World Relay Challenge in Poland in May.

Simbine finished fourth in the 100m final, while Maswanganyi and Munyai made the 200m finals.

SA seems to put a decent relay team out there, but the handing over of the baton messed up the whole thing.

Maswanganyi said he practiced with the injured sprinter Gift Leotlela, who suffered a hamstring injury after his 200m semifinal race.

“There are no excuses. I should have done better. However, there is a lot more to work on going forward. I take full responsibility for my mistake.”

Maswanganyi said luck was not on his side and that he would continue to work hard to make up for the unfortunate error.

“It is not over yet. I will put in more work and learn from this.”

ASA boss James Moloi said it was an unfortunate mistake and the team should learn from it.

“It was a disappointing thing to see happening to our relay team, but these things happen. We will work on it and help them to overcome the disappointment,” said Moloi.

Sports minister Nathi Mthethwa says the team that SA sent to the Olympic Games in Tokyo does not reflect the demographics of the country.
Sport
11 months ago

SA sprinters fail to make cut for 200m at Olympics

SA's poor showing in track and field at the Olympic Stadium in Tokyo continued, with Anaso Jobodwana, Shaun Maswanganyi, and Clarence Munyai failing ...
Sport
11 months ago

Gift Leotlela bowed out of the Olympic Games in Tokyo, Japan, with his head held high, although it is not the end he wanted.
Sport
11 months ago
Next Article