'It was a good experience, but not the end that I wanted' 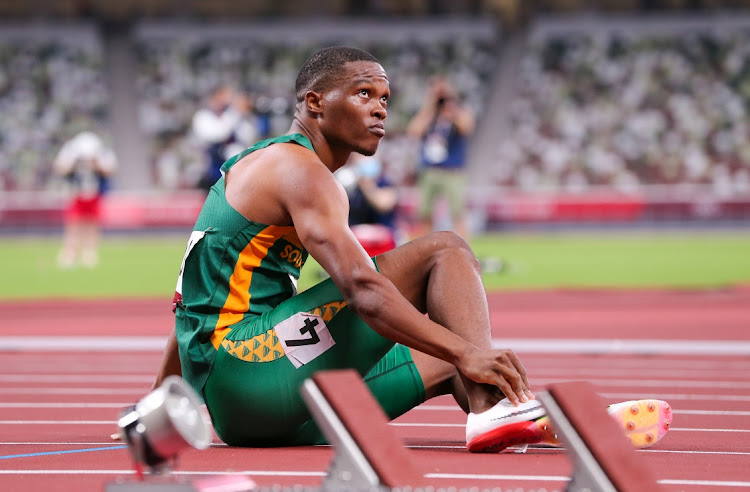 Gift Leotlela lies injured after his semi final in the mens 100m during the evening session of the Athletics event on Day 9 of the Tokyo 2020 Olympic Games at the Olympic Stadium on August 01, 2021 Tokyo, Japan.
Image: Roger Sedres

Gift Leotlela bowed out of the Olympic Games in Tokyo, Japan, with his head held high, although it is not the end he wanted.

Leotlela finished fourth in his 100m semifinal when he ran 10.03 seconds on Sunday. A hamstring injury robbed him of another chance to run for a medal in the relay team, and he expressed his disappointment.

“This is not the ending that I wanted, but we move on,” said Leotlela. “It was good experience overall.”

The 4x100m relay heats begin on Thursday with the final on Friday.

At 2016 Rio de Janeiro Olympics, Leotlela  battled stage fright when he was an 18-year-old novice. He did not go beyond the heats and he used his debut Olympics as a learning curve.

Five years later, the talented sprinter put on an impressive performance to make the semifinals at his second Olympics.

The postponement of the Tokyo Olympics in 2020 was a blessing in disguise for Leotlela as he was recovering from a knee injury at the time and had not qualified.

He was in top form this year and managed to qualify for the Olympics in style, clocking 9.94 seconds during the University Sport South Africa Championships in May.

In mid-May, Leotlela attended a training camp in Gemona, Italy, with the fastest man in Africa, Akani Simbine (9.84). He won three of his four races in Europe ahead of the Olympics.

Next year he will have more chances to prove his pedigree on the world stage, via the Commonwealth Games and the World Championships.

“I could not train this week because of a few niggles. I was nervous before the first race, and I enjoyed the first race and relied on my speed. It is time to move on and focus on the future,” added Leotlela.

Schoenmaker a golden ray of sunshine for SA

Olympic 200m breaststroke golden girl Tatjana Schoenmaker arrived back in SA yesterday, smiling and waving as she emerged from the international ...
Sport
1 year ago

Defending Olympic 400m champion Wayde van Niekerk has been knocked out of the Tokyo Games after finishing fifth in his semifinal.
Sport
1 year ago

SA long jump star Ruswahl Samaai wished the earth could open up to swallow him after he failed to qualify for the long jump final at the weekend.
Sport
1 year ago

SA sprint ace Akani Simbine had no excuses after failing to make the podium at his second Olympic Games in Tokyo, Japan, yesterday.
Sport
1 year ago
Next Article