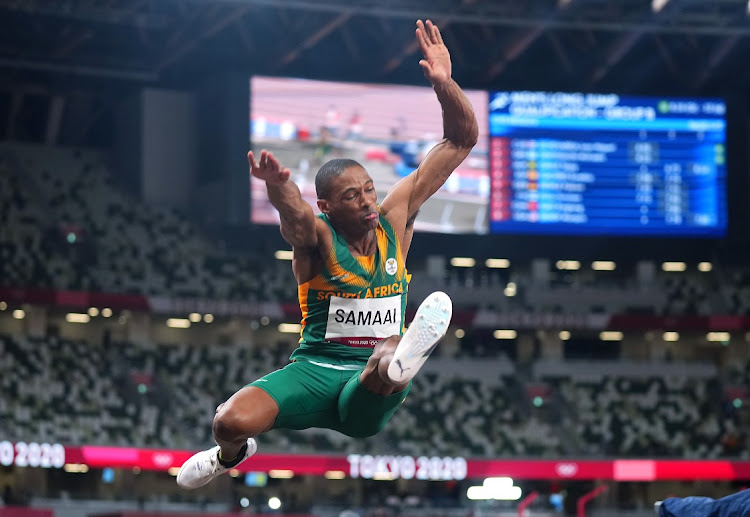 SA long jump star Ruswahl Samaai wished the earth could open up to swallow him after he failed to qualify for the long jump final at the weekend.

Samaai described his shock exit from the Olympics as the saddest day of his life. He wished he could pinch himself to see if he was not dreaming, unfortunately, the nightmare was true for the Paarl-born athlete.

Sammai says he wants to retire from athletics as he deemed himself a failure for failing to qualify for the Olympics long jump final for the second time.

Samaai was heartbroken over his elimination from the Olympics after he could manage 7.74m to finish in a disappointing 22nd place in the qualification rounds. He failed to make the top 12 for the long jump final, and he was distraught.

The three-time SA long jump champion and two-time African champion went into the Games as one of the favourites to make the podium. He said it was his moment before he arrived in Tokyo from his training camp in Gemona, Italy. But it ended in tears and heartbreak, and quitting seems to be the option for the short-tempered athlete.

His 2016 Rio Games ended in tears after he failed to make the final. He vowed to come back stronger, but everything fell apart in Tokyo. “I do not know what to say. I came here with one obligation, and it was to contribute to Team SA's medal tally. I failed dismally, and that jump was nowhere my best jump. I feel that I want to retire.”

SA sprint ace Akani Simbine had no excuses after failing to make the podium at his second Olympic Games in Tokyo, Japan, yesterday.
Sport
3 months ago

The country is looking at athletics to deliver the medals for Team SA at the ongoing Olympic Games in Tokyo, Japan, when the 10-day track and field ...
Sport
3 months ago
Next Article