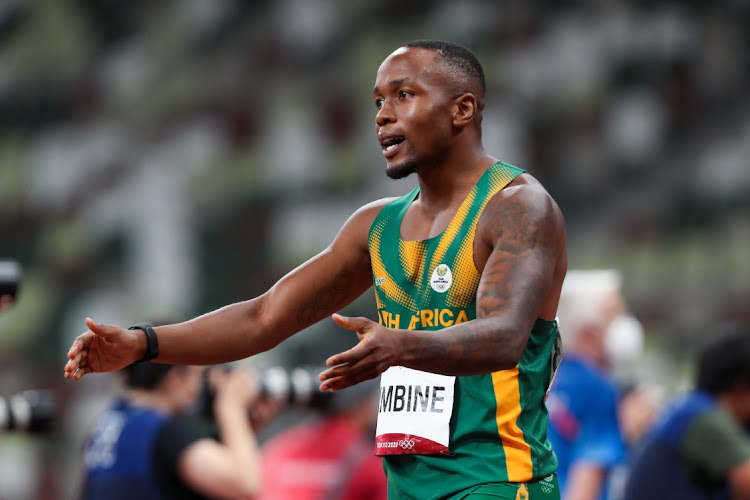 Akani Simbine reacts after finishing 4th in a final during the evening session of the Athletics event on Day 9 of the Tokyo 2020 Olympic Games.
Image: Roger Sedres

SA sprint ace Akani Simbine had no excuses after failing to make the podium at his second Olympic Games in Tokyo, Japan, yesterday.

The country looked to him to produce a medal as one of the seniors in Team SA in track and field.

Simbine finished in a disappointing fourth in 9.93 seconds at the Olympic Stadium in Tokyo.

Surprise winner Marcell Jacobs of Italy stopped the clock in 9.80, while Fred Kelly of the USA clocked 9.84. Canadian Andre de Grasse pipped Simbine to third place in 9.89 to take the bronze medal.

Zharnel Hughes of Great Britain got disqualified for a false start, and the race got delayed by a minute.

Simbine said the false start is not to blame for his below-par performance and made no excuses for his failure.

The 2018 Commonwealth Games champion qualified for the final with the fourth-fastest time of 9.90 and he was sad to finish his race in the same position.

It was anybody's race in the final, and after putting in a lot of preparations, including going to a training camp in Gemona, Italy, in mid-May with his coach Warner Prinslo, Simbine was distraught.

At the Rio de Janeiro Olympics in Brazil in 2016, he secured fifth place in the final.

He broke the African record with a time of 9.84 in Hungary two weeks before the Tokyo Games.

“The better man won on the day. I am happy for Jacobs, and I am disappointed in myself. I made the final. No, the false start did not affect my performance. You have to reset and get going,” said a visibly disappointed Simbine.

De Grasse took the bronze in Rio, and five years later he pipped Simbine to the bronze again.

“Andre seems to keep on pipping me at the championships, and it sucks. It is what it is, and I cannot do anything to change the results.”

Simbine, 27, said he is looking forward to the 2024 Olympic Games in Paris, France, where he will be 30 years old.

“I do not know what the future holds, but in three years I am looking to the Paris Olympics. Age is still on my side. I have a team behind me,and they helped me to prepare as best as I could.”

Gift Leotlela suffered a hamstring injury in the semifinals, while Shaun Maswanganyi got eliminated in the semifinals. SA has yet to win track and field medal after three days of competition.

Simbine will shift his focus to the 4x100m relay with the heats on Thursday and the final on Friday if Team SA qualifies.

Leotlela will not make the relay team due to injury in the semifinals.

“I still have the 4x100m heats coming up, and I am looking forward to it. I need time to gather my thoughts before getting back to it,” added Simbine.

Akani Simbine will shoot it out for the title of world’s fastest man later on Sunday afternoon after qualifying in the semifinals.
Sport
2 months ago