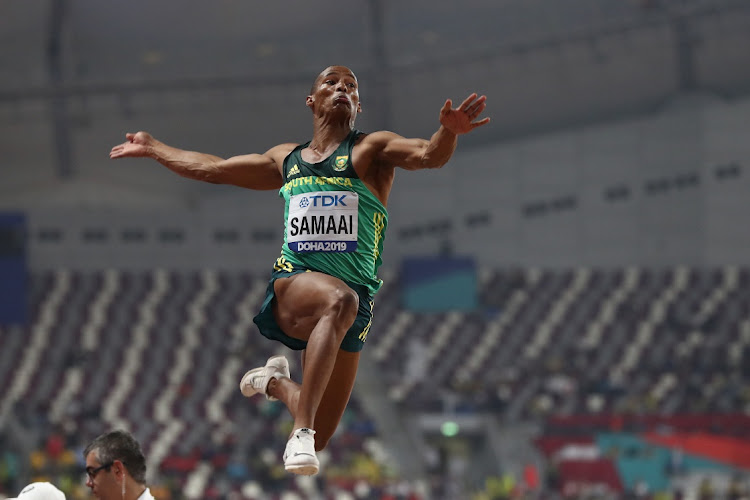 The country is looking at athletics to deliver the medals for Team SA at the ongoing Olympic Games in Tokyo, Japan, when the 10-day track and field events start at the Olympic Stadium today.

Sokwakhana Zazini will open the account for Team SA on day one in the 400m hurdles today at 04.57am SA time.

Africa's 100m record-holder Akani Simbine will start his bid to win his first Olympic medal in the heats, tomorrow at 4.35am SA time. Simbine will contest the 100m final if he makes it in the heat on Sunday at 2.30pm.

Simbine is not the only athlete under pressure at the Games. Long jump star Ruswahl Samaai is under pressure to win his first Olympic medal. He will be in action in the long jump qualification tomorrow at 12.10pm.

Samaai will jump in the final on Monday at 10.20am SA time at the Olympic Stadium if he makes it in the qualifications rounds.

“This is my second Olympic Games. I am ready to take wings and lift off. This is my moment," said Samaai.

Cheswill Johnson, 23, does not have the same pressure as the SA three-time champion has. He is at the Games to test himself and gain experience.

The 2008 Olympic silver medalist, Khotso Mokoena, told Sowetan that Samaai would finish on the podium in Japan. “This is his year. Samaai is in top shape and has the chance to win a medal in the long jump. He has the experience, and I see him making the podium. He works hard and wants this," said Mokoena.

Respected athletics coach Warner Prinsloo also tipped Samaai to make the podium. “We were with him in Italy and saw how he prepared for the Olympics. He will make the podium. It's his second Olympics, and he is hungry for a medal," said Prinsloo.

In 2016 in Rio de Janeiro, SA won 10 medals. But two of the previous podium finishers – Caster Semenya and Luvo Manyonga – are not part of the team ...
Sport
4 months ago

Athletics SA (ASA) boss James Moloi expressed his confidence in the athletes that qualified for the Olympic Games in Tokyo, Japan, later this month.
Sport
5 months ago

Taking the long jump into marriage

Fresh after winning his third long jump title at the SA Senior Track and Field Championships in Pretoria last month, Ruswahl Samaai is set to get ...
Sport
6 months ago
Next Article