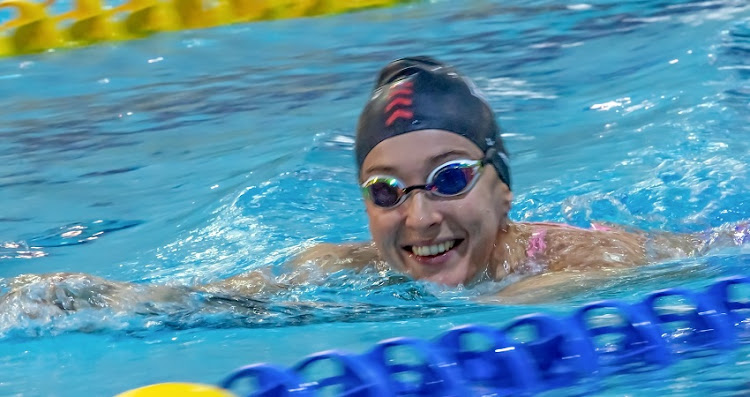 Another SA woman‚ another record. Emma Chelius broke her own national women’s 50m freestyle mark at the Tokyo Olympics on Friday night to advance to the semifinals on Saturday morning.

But Brad Tandy was eliminated in the men’s event‚ marking the end of an impressive Games tradition for SA men’s swimming.

For the first time since Sydney 2000 — and only the second time in the eight Olympics since readmission — SA failed to get a swimmer into the final of the men’s 50m freestyle.

Tandy‚ who finished joint sixth at Rio 2016‚ was sixth in his heat in 22.22sec‚ which placed him joint 24th and a quarter of a second off the slowest qualifier. American star Caeleb Dressel was the quickest in 21.32.

Roland Schoeman‚ one of the SA competitors to miss the final in the Australia showpiece 21 years ago‚ won the 50m bronze at Athens 2004 and then still fought his way into the finals at Beijing 2008 and London 2012.

Chelius‚ who clocked 24.65 to finish third in her heat and joint 11th overall‚ will attempt to become the first SA woman to reach an Olympic final in the women’s sprint‚ but she will probably need to break the 24.62 African record to get there. The eighth-fastest in the heats on Friday went 24.41.

For the first time since 2000‚ SA women have outperformed their male counterparts. So far they have landed two medals and three finals to the single final achieved by Chad Le Clos. Three women — Tatjana Schoenmaker‚ Kaylene Corbett and Chelius — and have made it to four semifinals so far‚ but only two men have managed that‚ Le Clos and Matttew Sates.

Schoenmaker‚ fresh from winning her Olympic 200m breaststroke crown in a world record earlier in the day‚ was unable to rescue the SA women’s 4x100m medley relay team‚ which finished second last in their heat in 4min 03.02sec.

Schoenmaker‚ who set the 1min 04.82sec Olympic record for the 100m breaststroke early in the gala‚ delivered the slowest leg on the night‚ clocking 1:07.41.

But it was her seventh race of the Games and none of her counterparts had broken a world record in the morning.

SA had mixed fortunes on the opening day of the athletics.

Soks Zazini clocked 49.51 to finish third in his heat and book his spot in Sunday’s semifinals.

Not even the 15:05.01 she ran to make the final at the 2019 world championships would have got her through‚ and her 14:59.08 personal best would only have snuck her through as the slowest qualifier.

But the athletics track is where Team SA will be looking for their next medals‚ with the front-runners being Akani Simbine in the 100m and Wayde van Niekerk in the 400m.