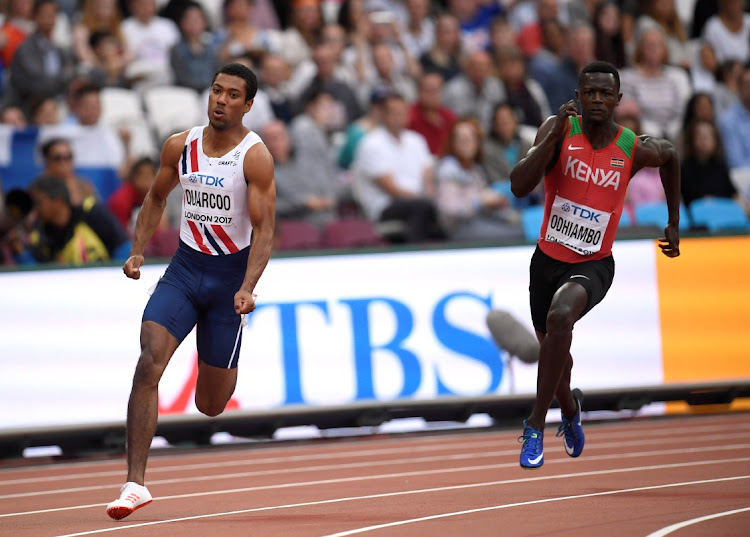 Mark Otieno Odhiambo of Kenya in action alongside Jonathan Quarcoo of Norway at the World Athletics Championships in 2017.
Image: REUTERS/Toby Melville

Two Kenyan 100 metre runners breaking new ground at the Tokyo Olympics are hoping to change perceptions that the country, known for its dominance in middle and long-distance running, cannot challenge for medals in the sprints.

Ferdinand Omanyala and Mark Otieno believe they can spring a surprise in a race that is the most open for many years after the retirement of Usain Bolt.

Kenya's distance pedigree is second to none but this will be the first time the country has competitors in the 100metres, according to Bernard Ouma, a coach with Team Kenya.

"Most of the people in the world don't believe that Kenyans can sprint, but we are changing that slowly," said Omanyala, who holds the national record with 10.01s and qualified at the Kenyan Olympic trials last month.

"It's not only for the Jamaicans and the USA, they are not made of steel, they don't use petrol. It's just in the mind. Change the mind and everything changes," he added.

Omanyala's route to Tokyo has not been a smooth one, however.

The sprint sensation clocked in at 9.94 sec
Sport
8 months ago

He served a 14-month doping ban from the Anti-Doping Agency of Kenya imposed in 2017 and had to fight the country's officials to overcome their rules prohibiting Olympic selection of doped athletes.

Otieno, who has a best of 10.05, is also convinced the time is ripe to crash the Jamaica-US party. "Right now you can't count on who is going to take the race, you might surprise people next week, because anything can happen," he said.

Otieno said he plans to approach the race tackling each step at a time. "I am looking forward to reaching the final and to seeing who is going to take the medals," he said.

Otieno said he looked up to American Trayvon Bromell as an inspiration and admired how he was able to recover from injury and work his way back into Olympic contention.

Bromell produced the fastest time of 9.77s this year and is favourite for gold but Omanyala says the race is anybody's.

"I don't fear anybody," he said. "I am going to that race knowing that I am also the same as these guys, we have all qualified," he said. "I can win it, why not?."

Athletics Gauteng North (AGN) president Hendrick Mokganyetsi is hoping that athletes will take advantage of their final league meeting of the season ...
Sport
7 months ago

Caster Semenya wins 3 golds for SA at the African championships