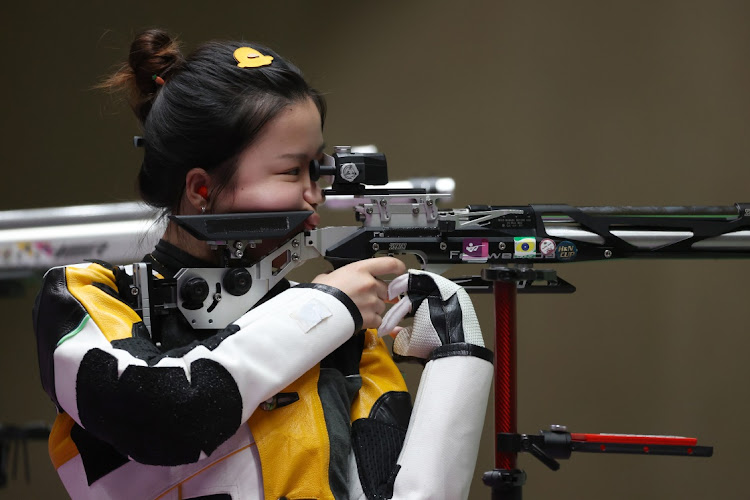 Gold Medalist Qian Yang of Team China competes during the medal round of the 10m Air Rifle Women's event on day one of the Tokyo 2020 Olympic Games at Asaka Shooting Range on July 24, 202.
Image: Kevin C. Cox

Sport stretched out over Tokyo on Saturday as the Olympic Games finally got underway, but the shadow of Covid-19 and controversy was never far away on the opening day.

That moment had capped an opening ceremony shorn of glitz and staged in an eerily silent stadium.

But while the ceremony had been like none before, day one of sport offered a much more familiar feel.

Despite the absence of spectators, the world's elite athletes ran, rode, fought and swam as a hankered-for business-as-usual vibe began to build.

The sight of an athlete, eyes glistening with joy, was always going to be a welcome one for organisers, and 21-year-old Chinese shooter Yang provided it, holding her nerve in the women's 10-metre rifle competition to overhaul Anastasiia Galashina.

The SA Under-23 team are out to make history by becoming the first team to reach the knockout stages of the Olympic Games.
Sport
10 months ago

The Russian crumpled under pressure on her final shot, shooting 8.9, by far her worst shot of the day, and the worst score any of the finalists registered.

"I got too nervous, held on too long," she said. "My thoughts were not in the right place. I lost concentration. The explanation is very simple.

"I had mixed feelings, joy and bitterness at the same time. But now I am happy. I made a mistake. Nothing major. It will allow me to learn something, it's a lesson for the future."

Yang was thrilled, and hinted at her prime motivation: "It's the 100th birthday of the Chinese Communist Party," she said. "I'm so happy that this golden medal is a gift to my country. I'm so proud."

Later at the shooting, Jin Jong-oh missed his target of a record-extending fifth individual Olympic gold as the South Korean failed to qualify for the men's 10-metre pistol final.

With 11 gold medals up for grabs on day one, organisers will be hoping sport can distract from the stream of embarrassing gaffes and COVID-19 woes which have marked the event, postponed by a year.

But there was no ignoring the global pandemic, as organisers said one more athlete had tested positive for the virus, bringing the total number of disclosed cases to 123.

Later, two American archers said they were free to choose whether or not they get vaccinated against COVID-19, after a U.S. Olympic swimming gold medal prospect who had declined the vaccine was widely criticised on social media.

"It's one hundred percent a personal choice, and anyone that says otherwise is taking away people's freedoms," Brady Ellison, the world's No.1 and one of the top medal hopes at Olympic archery, said on the competition sidelines.

SA race walker Lebogang Shange will not compete at the Tokyo Olympics after the Court of Arbitration for Sport (CAS) upheld his four-doping ban on ...
Sport
10 months ago

Organisers are also preparing for a typhoon, having already rescheduled Monday's rowing competitions to integrate them in the schedule for Saturday and Sunday.

But while the rowers look anxiously to the skies, surfers -- who start their competitions on Sunday -- should benefit from bigger swells.

At 12-years-old, Syria's Hend Zaza is the youngest athlete competing in Tokyo but her table tennis tournament was over in a flash as she lost to Austria's Liu Jia, before taking a selfie with her conqueror.

Liu, who has a 10-year-old daughter, had struggled to sleep on the eve of the event.

"Yesterday I asked my daughter, 'Do you know your mother is playing against someone two years older than you?' Her first response was, 'Then you better not lose!' I said 'Don't give me pressure!'"

The 3x3 basketball tournament made its debut and the hosts were well beaten by the Russians in the women's opener.

"From the streets to the Olympics," is the motto of the event, pronounced three-ex-three, as basketball seeks to grow its global appeal.

All eyes will be on Tadej Pogacar later as the 22-year-old Slovenian attempts to win the Olympic road race gold less than a week after claiming his second successive Tour de France title.

Tatjana Schoenmaker is SA’s only world No.1 contender heading into the Tokyo Olympics‚ but the breaststroke queen talks like she’s getting ready for ...
Sport
10 months ago

SPONSORED | In celebration of the Olympic Games Tokyo 2020, Showmax Pro is launching a special offer to new subscribers
Sport
10 months ago

After a period of gloom, South Africans finally have something to look forward to, which can take their minds off the despairing pictures we’ve seen ...
Opinion
10 months ago
Next Article