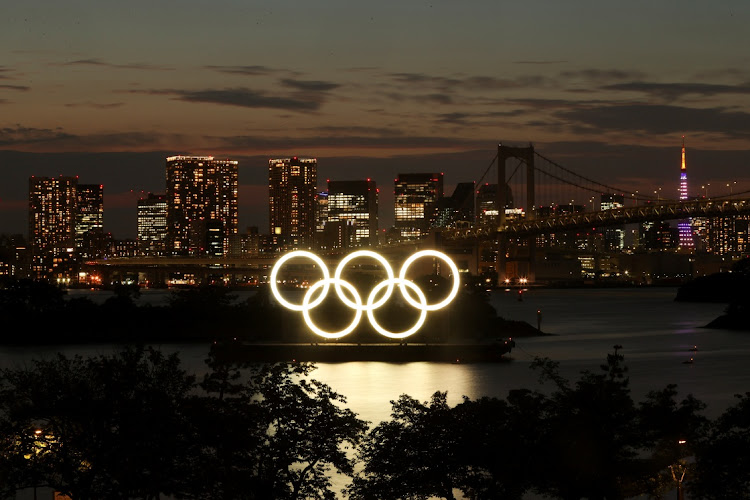 The Olympic Rings installed on a floating platform with the Rainbow Bridge in the background in preparation for the Tokyo 2020 Olympic Games in Tokyo.
Image: REUTERS/PAWEL KOPCZYNSKI

Battered by scandal on the eve of the opening ceremony, Tokyo 2020 organisers have the chance to patch up the Games’ image when they reveal today who will carry the Olympic flame for the final few steps to light the stadium’s cauldron.

The identity of the final torchbearer is one of the Games’ most closely held secrets yet speculation has swirled for months around well-known athletes including Naomi Osaka, the four time Grand Slam tennis champion, whose superstar status could also draw attention away from the string of gaffes by organisers in the build-up to the Games.

The world number two’s first Olympic match in Tokyo has been pushed back a day to Sunday following a request from Tokyo 2020 organisers, the International Tennis Federation said.

Osaka, who is returning after a two-month mental health break, was scheduled to kick off proceedings at the Ariake Tennis Park’s main showcourt.

Tokyo 2020 did not immediately respond to a request for comment.

The Games have courted controversy throughout the buildup, and on Thursday, the opening ceremony director was fired after comments he made about the Holocaust in a 1990s comedy sketch resurfaced and sparked a public outcry.

Days earlier, the ceremony’s composer stepped down after comments he made in interviews in the 1990s about abusing and bullying classmates were circulated on social media.

And former Tokyo 2020 chief Yoshiro Mori was forced to quit early this year after he made sexist comments about women talking too much.

Japan has also come under fire for holding the Olympics in the midst of the pandemic. Two thirds of people said they doubted that Japan could host a safe Games, with more than half saying they opposed the Olympics going ahead, according to a recent poll.

Tokyo 2020 organisers said three more athletes had tested positive for Covid-19, bringing the total to 11 since July 2. All Olympic related cases, including officials and media, rose by 19 to 106, the biggest one-day gain yet.

“I have no fear because everybody is tested every day and we all do our own things,” Kellie Harrington, a boxer and Team Ireland flag bearer said at a press conference. “If you start worrying about that, you may as well pack your bags and go home like, you’ve got to focus on the competition.”

Naomi Osaka, 23 With an Haitian father and Japanese mother, Osaka represents a more modern and diverse Japan and is a voice supporting racial and gender equality in a ceremony where many countries are promoting athletes with a message of diversity. Named by Time magazine as one of the most influential people in the world for the past two years, she is Japan’s most recognizable athlete.

Ichiro Suzuki, 47 An icon of Japanese baseball, Suzuki won fame both in Japan and the United States as a player of the Seattle Mariners and New York Yankees. His move to the United States garnered criticism at home, but he won over skeptics with a career that saw him in 2016 reach 3,000 hits, a feat only a handful of players have achieved. Known for his focus and hard work he is often held up as a role model for children to aspire to.

Shohei Ohtani, 27 The baseball all rounder is the latest Japanese player to score big in the United States after joining the Los Angeles Angels in 2018. Earning the nickname Shotime, the left-hand batter and right-handed pitcher is known for his good looks and cool demeanor.