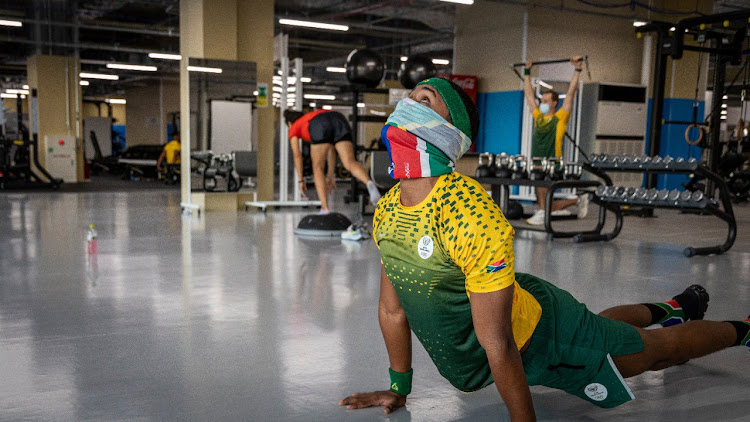 Team South Africa athletes during a gym session at the Olympic Village in Tokyo.
Image: @TeamSA2020/Twitter

The Tokyo Olympic Games have had their share of positive coronavirus cases before they open, but health expert Brian McCloskey says they were to be expected and are lower than initially imagined at this stage.

U.S. tennis player Coco Gauff tested positive for Covid-19 before her departure. Other athletes have tested positive at the airport after arriving in Japan or once inside the bubble that is the athletes' village.

"What we are seeing is what we expected to see," McCloskey, a leading adviser to the Games, told a news conference on Monday. "We do the tests because they are a way of filtering out (people with Covid-19)."

"We identify them early, taking them apart from other people. It is expected. Each layer of filtering is a reduction of risk. The numbers we are seeing are lower, maybe lower than we were expecting," he said.

McCloskey, who chairs an independent panel of experts advising organisers on Covid-19 mitigation measures, said there was no way of being 100% sure that no athlete would be infected but measures in place were reducing that risk considerably.

Some critics have said the Games should not go ahead during a pandemic. Many Japanese are also worried the Games could become a super-spreader event.

Just four days before the opening ceremony, 68% of respondents in an Asahi newspaper poll expressed doubt about the ability of Olympic organisers to control coronavirus infections, with 55% saying they were opposed to the Games going ahead.

Asked whether the athletes' village was safe, McCloskey said: "Yes... The longer you stay in the village the less likely it is (for people) to test positive as we are filtering people out."

McCloskey, who in 2012 was in charge of the UK Health Protection Agency's preparations for the London Olympics, said he did not want to put a figure of how many cases would constitute a successful Games.

"We don't put a figure on it. It is impossible to predict. What we need to do is (ensure) that the number is as low as possible. No matter what the number is, it's important how quickly we try to find them," he said.

Organisers not only need to find those infected but also have to take out of circulation all those who have been in contact with an infected individual and ensure they are isolated and tested prior to competitions.

He did not rule out that contact with infected people could potentially lead to Olympic exclusion but said "all the measures in place.... will reduce the risk of anybody spreading it."