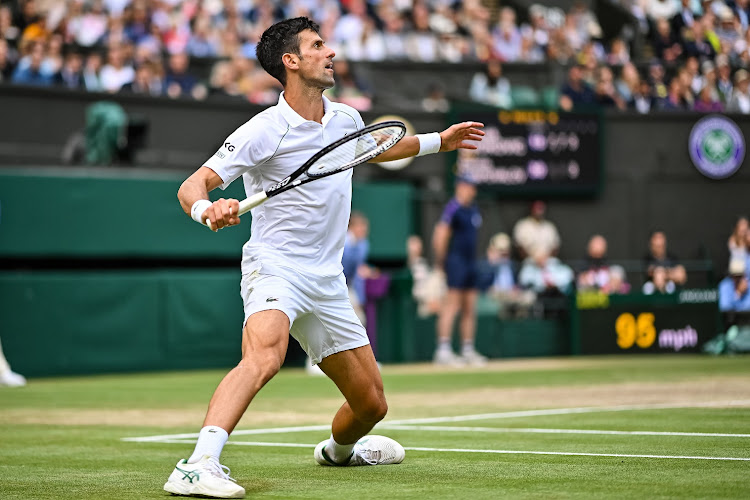 Novak Djokovic of Serbia hits a forehand against Dennis Shapovalov of Canada in the semifinals of the men's singles on day 11 of The Championships - Wimbledon 2021 at the All England Lawn Tennis and Croquet Club on July 09, 2021.
Image: TPN/Getty Images

Defending champion Novak Djokovic absorbed a barrage of powerful hitting from Canadian Denis Shapovalov to reach his seventh Wimbledon final on Friday with a 7-6(3) 7-5 7-5 victory that kept the indefatigable Serb on course to write history.

The 34-year-old was eclipsed at times by his 22-year-old opponent on an overcast Centre Court but as he almost always does, converted his chances in clinical fashion to set up a Sunday showdown with Italian Matteo Berrettini.

Tenth seed Shapovalov was bidding to become only the second Canadian man to reach the Wimbledon final and despite producing some scintillating tennis, he was left pondering what might have been after failing to crack the toughest nut in the business.

He struck 40 winners but whenever Djokovic found himself in peril, he manned the barricades, saving 10 of the 11 break points he faced and making only 15 unforced errors as he refused to be derailed in his pursuit of a 20th Grand Slam title.

Djokovic won the opening set despite Shapovalov serving for it at 5-4, then saved several break points in the second as his opponent threw the kitchen sink at the five-time champion.

Even in the third set Shapovalov continued shooting from the hip but eventually his fire blew out as Djokovic claimed one of the toughest straight sets wins of his Wimbledon career.

Shapovalov left the court with tears in his eyes but he showed enough in a marvellous run to suggest that he is ready to challenge for the biggest prizes in tennis.