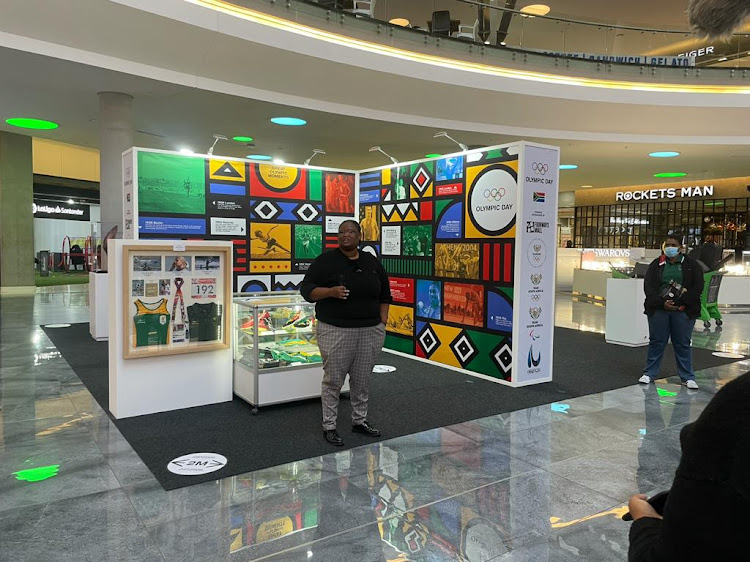 Chad Le Clos’s gold medal and Elana Meyer’s tiny running kit are among the exhibits at the Olympic pop-up museum that opened at Fourways Mall‚ north of Johannesburg‚ to mark Olympic Day on Wednesday.

Scheduled to run until Saturday‚ it replaced the fun run that is normally organised to celebrate the day.

The items on display‚ which include Hezekiel Sepeng’s race number from Atlanta 1996‚ with a message he wrote on it the night before the final‚ were loaned to the South Sports Confederation and Olympic Committee (Sascoc).

Also on display are a gigantic shoe worn by American basketball star Shaquille O’Neal at Atlanta 1996‚ as well as an early pair of running spikes made in by the JW Foster company‚ which later became Reebok.

Le Clos‚ South Africa's most decorated Olympian of all time with two medals‚ lent his two medals from London 2012‚ including the gold he won for famously beating American legend Michael Phelps in the 200m butterfly.

The Ndebele-inspired exhibit‚ set up by Newton Agency‚ contains four sections with different topics which will offer the average sports fan a useful crash course on the Olympics and significant SA performances over the years.

All the tracksuits worn from SA’s readmission at Barcelona 1992 up to what they’ll wear in Tokyo from next month are also on display‚ and it’s clear that the clown-sized Rio 2016 outfit was the ugliest.