Manyonga banned for four years, Van Niekerk off to Tokyo 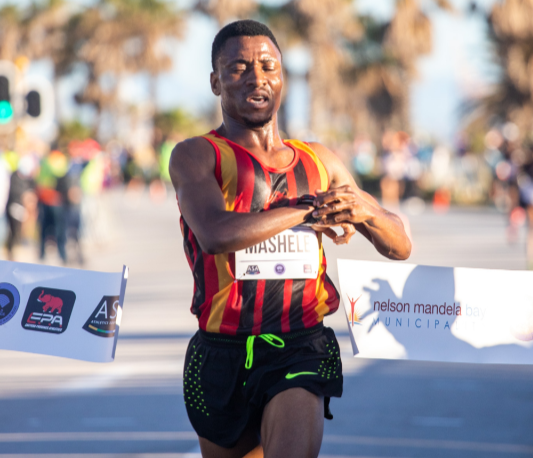 Gauteng's Precious Mashele stops his watch as he breaks the tape to claim his first national half marathon title at the Nelson Mandela Bay Half Marathon.
Image: Fabian Smith

It was a busy weekend for Athletics SA (ASA) as well as athletes in the country and across the world. ASA held a three-day strategic meeting in Kempton Park, while athletes tried to qualify for the Olympic Games at various events all over the world.

The weekend started with a dose of bad news when disgraced long jump star Luvo Manyonga received a four-year ban for a doping violation. Manyonga and his Port Elizabeth-based lawyer, Brendan Weldrick, did not respond to various notices informing them of the hearing set for May 28, wrote the arbitrator, who made his ruling based on papers submitted.

On the same day, middle-distance runner Precious Mashele failed to run an Olympic-qualifying time despite winning his 5,000m race in Pietermaritzburg.

Golden girl Caster Semenya finished in fourth place at 15:57:12 in the 5,000m at the Sparkassen Gala in Germany on Saturday. She needs to run 15:10:00 to qualify for the Olympics.

However, the Olympic men’s 400m record holder Wayde van Niekerk qualified for the Olympics when he ran 44.56 to finish in second place in Madrid in Spain on Saturday night.

“It was an extremely busy weekend for the ASA board and the athletes. Congratulations to Wayde for qualifying for the Olympics. We still believe that Caster and Precious can qualify before the cut-off date of June 29. As for Luvo, we will have a meeting with him to discuss his rehabilitation process and map the way forward. The board meeting went well and ASA has a bright future,” Moloi told Sowetan yesterday.

The feeling of breaking the South African 3000m record has not yet sunk in for prominent middle-distance runner Jerry Motsau.
Sport
5 months ago

Athletics Gauteng North (AGN) president Hendrick Mokganyetsi is hoping that athletes will take advantage of their final league meeting of the season ...
Sport
5 months ago

Troubled long-jump maestro Luvo Manyonga has been banned for four years for a doping violation that in the end he didn’t even try to contest.
Sport
5 months ago
Next Article