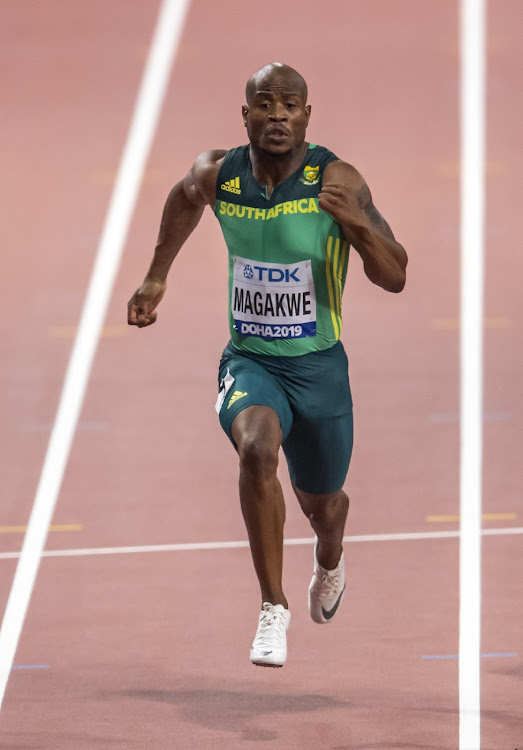 Simon Magakwe during the 100 Metres qualification round during day 1 of the IAAF World Athletics Championships at Khalifa International Stadium on September 27, 2019 in Doha, Qatar.
Image: Anton Geyser

SA athletes have greeted the news of a change of venue for the African Senior Athletics Championships with mixed feelings.

Athletics SA (ASA) confirmed that it would be sending a small team to the championships but ASA boss James Moloi said they would investigate if it is safe to do so due to the Covid-19 pandemic.

“We will look into the matter and make sure that our athletes are safe. The plan is to send a small team, as some of the athletes have already made their Olympic preparations abroad," said Moloi.

SA athletes were frustrated in 2018 when the championships took place in Asaba, Nigeria. African 400m silver medallist Thapelo Phora and former SA 100m champion Simon Magakwe, who travelled with Team SA to the African competition, told Sowetan about their experience.

“Eish, Nigeria was a nightmare. It was not a good experience for us at all. We got frustrated the entire time that we spent there. I won't remember the championships even though I won a medal there," said Phora.

SA golden girl Caster Semenya, Olympic long jump silver medallist Luvo Manyonga and African long jump champion Ruswahl Samaai were some of the big-name SA athletes that were stuck at the airport for several hours. Magakwe remembers the trip as if it were yesterday.

“The trip to Nigeria in 2018 was a terrible experience. I remember it very well because we slept on the airport benches and waited for a connecting flight to Asaba for hours. We ended up sleeping at the hotel in Lagos and the long wait for a connecting flight started again the following day. It took the whole day for us to get a flight to Asaba and another whole day for us to get a flight to Lagos after the event. It was very bad. I will never forget that and I am surprised that the championship is going back to Naija," Magakwe told Sowetan yesterday.

SA 10 000m champion Mbuleli Mathanga is hoping to go so that he can try and qualify for the Olympic Games in Tokyo, Japan, that start next month.

Though time is not on their side, Athletics SA (ASA) has promised to help Caster Semenya, Precious Mashele and Mbuleli Mtahanga to qualify for the ...
Sport
2 weeks ago