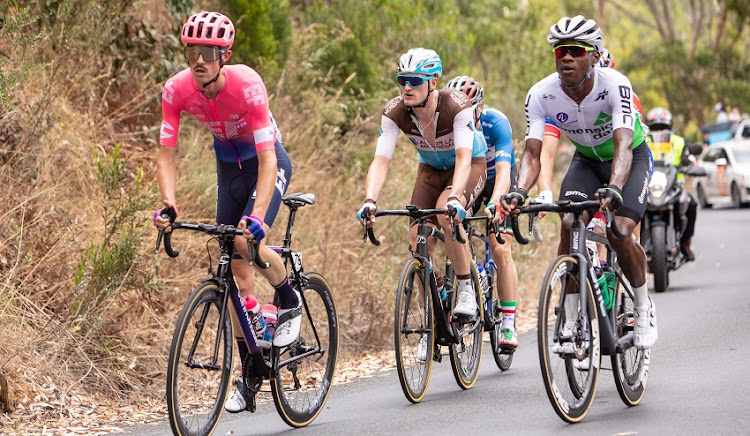 James Whelan of Australia and EF Education First Pro Cycling, Nic Dlamini of South Africa and Team Dimension Data for Qhubeka, Nico Denz of France and AG2R La Mondiale, Leo Vincent of France and Groupama-FDJ and Elia Viviani of Italy and Deceuninck - Quickstep on the King of the Mountain climb at Fo Creek during Stage 3 from Lobethal to Uraidla of the Santos Tour Down Under on January 17, 2019 in Uraidla, Australia.
Image: Peter Mundy/Getty Images

Nic Dlamini‚ who suffered a broken arm when he was assaulted by rangers at the Table Mountain national park in late 2019‚ was on Thursday named in SA’s powerful cycling team to do battle at the Tokyo Olympics.

Team SA has a shot at securing its first Games cycling medal since Melbourne 1956‚ with Ashleigh Moolman-Pasio arguably offering the best chance‚ in the women’s road race.

Dlamini‚ Daryl Impey and Ryan Gibbons could be a force in the men’s road race and Alan Hathely could be a factor in the mountain bike category.

The men will race 234km on a route that includes Mount Fuji on the first full day of the Games‚ July 24‚ while the women are in action over 137km on the following day.

The cyclists were part of the first team announcement by the SA Sports Confederation and Olympic Committee (Sascoc) that also included medal hopes like sprinter Akani Simbine and long-jumper Ruswahl Samaai.

The deadline for track and field qualification is June 29.

Defending 400m champion Wayde van Niekerk is among those still needing to qualify for Tokyo‚ but Athletics SA (ASA) high performance manager Hezekiel Sepeng said the world record-holder was fit after an injury scare at the weekend.

Van Niekerk pulled up during the 200m at the Boston Games on Sunday‚ complaining of a tight right hip.

“All is well with Wayde van Niekerk‚” said Sepeng‚ pointing out that the injury was “not that serious”. Van Niekerk‚ who is training in the US with his new coach Lance Brauman‚ is expected to join his SA teammates at their regular training camp in Gemona‚ Italy‚ next month.

Sunette Viljoen‚ the women’s javelin silver medallist from Rio 2016‚ and 800m champion Caster Semenya‚ who is now doing the 5‚000m‚ are also yet to qualify for Tokyo.

Long-jump runner-up from 2016‚ Luvo Manyonga‚ is out of the picture after copping an automatic suspension for missing three doping tests in a 12-month period.

“I feel this being my third Olympics is what will give me the advantage to get a top result. I really want to go there and make my country proud.”

Moolman-Pasio‚ who Swill have only one support rider in Carla Oberholzer‚ has made the podium riding by herself in the past‚ like when she snatched the bronze at the 2014 Commonwealth Games in Glasgow.

“I’m looking forward to riding alongside Carla … I do know will give of her best to support me‚” she said‚ adding that there was also consistency in the staff and team.

SA is also entering the Olympic track and BMX competitions.

Also heading to her third Olympics is Irvette van Zyl‚ who broke the world best in the 50km in Gqeberha on Sunday. But she failed to finish the marathon at London 2012 and was unable to start at Rio 2016 because of injury.

She’ll be looking to make it third time lucky in Japan.

The athletes and officials named on Thursday are: