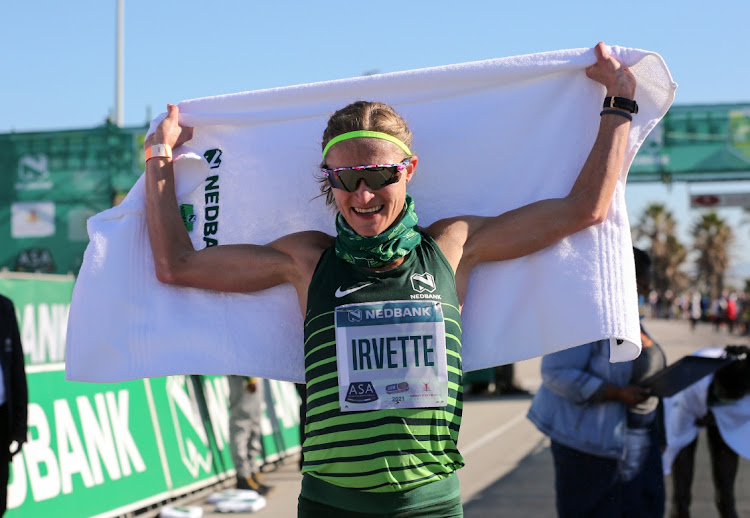 Irvette van Zyl smashed the 50km wording recording when she came in first in a time of 3: 04: 23, at the Nedbank Runfied 50km race on Saturday in Gqeberha.
Image: Werner Hills

If you had told the three-time Soweto Marathon champion Irvette van Zyl that she would break the 50km world record this year, she would not have believed you.

Last year, the Olympic-bound marathoner had knee surgery and feared that her athletics career would be over.

Lillian Chemweno of Kenya secured second place in 3:05:00, while Russian Dominika Stelmach had to settle for third in 3:10:26.

Van Zyl and Negasa received R100,000 each for winning the men's and women's races. The two winners also each received a R150,000 bonus for breaking the records.

Van Zyl said the weather conditions suited her and she knew that she would do something special after the 30km mark. “The conditions were great and I felt good. At 30km I was meant to go off, but I felt good. After Nick Bester [Nedbank Running Club team manager] gave me the signal,I pushed through to the finish line,” Van Zyl told Sowetan yesterday.

She said she started to think about the day she went under the knife when she crossed the finish line.

Van Zyl ran an Olympic qualifying time at the Xiamen Marathon & Tuscany Camp Global Elite Race in Siena, Italy, last month. She secured a 13th place finish in 2:28:40 to book her place in the Olympic team.

However, Van Zyl described her world record run as her biggest achievement in her illustrious career. “If you asked me a year ago today, I wouldn’t have said that I would be here due to my knee surgery, but this is such a proud moment for me and I am grateful for this opportunity,” she said.

Athletics SA boss James Moloi delivered on his promise that the event would be broadcast live on television. “We are pushing for all our events to be televised. It is a new era and we are collaborating with SABC to bring you the action live. I made a promise and I delivered and move events will be on TV going forward,” added Moloi.

The quality fields made breaking world bests along the Friendly City’s beach front seem easier than pronouncing Gqeberha‚ with three men and two ...
Sport
1 year ago

South African athlete Irvette Van Zyl was the first female runner to cross the finish line in the women's race in the Nedbank Runified Breaking ...
Sport
1 year ago
Next Article