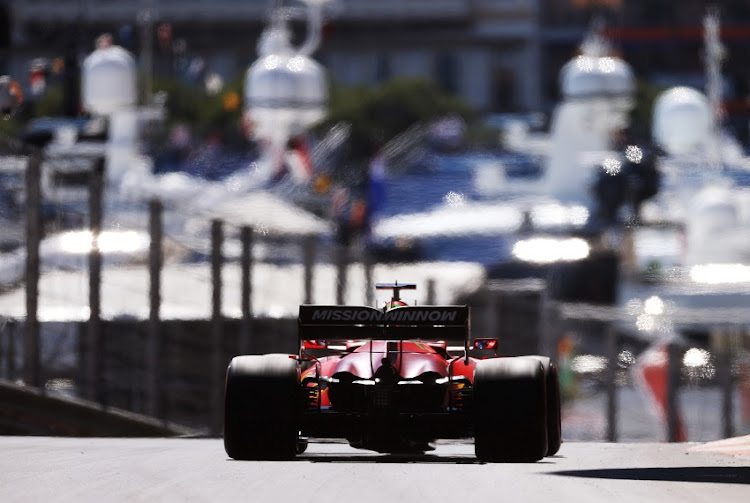 Charles Leclerc of Monaco driving the (16) Scuderia Ferrari SF21 on track during practice ahead of the F1 Grand Prix of Monaco at Circuit de Monaco on May 20, 2021 in Monte-Carlo, Monaco.
Image: Lars Baron/Getty Images

Charles Leclerc was quick to play down Ferrari's prospects before his home Monaco Grand Prix weekend but others are talking them up now.

The 23-year-old led Thursday practice around the winding city streets as Formula One's oldest and most glamorous team, winless last season in their worst campaign for 40 years, emerged as more of a threat to Mercedes and Red Bull.

"It's looking good, but for now its looking a bit too good to believe it," said Leclerc, ever wary of tempting fate, after ending the second session one-two with Spanish team mate Carlos Sainz.

"There's still a bit of margin, but on the other hand I'm sure that Mercedes and Red Bull have more margin than we have so we shouldn't get carried away too much."

Sainz was less cautious: "We definitely look very close to being a genuine threat," said the Spaniard, who has never finished outside the points in Monaco.

A top-10 finish for Leclerc would make him the first Monegasque to score at home since Louis Chiron in 1950, and there will be a live crowd of 7,500 to see it.

Hamilton and Verstappen are the only drivers to have finished in the top two this season. The champion is 3-1 on wins, the Dutch 23-year-old 3-1 on second places.

Jenson Button, the 2009 world champion, has called Monaco a 'must win' for Verstappen but there are still 19 races to go and only 14 points separating the pair. Verstappen's response was to say every race was a must win.

That said, a fourth win in five for Hamilton -- who needs two more for a career 100 after already achieving a century of poles -- would start to look a lot like the same old story.

Track position is everything on Monaco's narrow and unforgiving layout where overtaking is harder than almost anywhere else, and Saturday's qualifying will be key.

Having a Ferrari on the front row would certainly spice things up.

Leclerc has crashed in his two previous Monaco appearances in Formula One, with last year's race cancelled due to COVID-19, but 2021 could be the year he finally gets to meet the prince on the podium.

Red Bull have a strong record at Monaco, with Daniel Ricciardo winning in 2018, but Verstappen less so.

He has had two retirements in five starts and fourth in 2019, after finishing second but being demoted for an unsafe release from the pits, remains his best result.

"Around here we've been a bit up and down, sometimes very competitive and sometimes a bit off," he said.

Third-placed McLaren, with a one-off livery in the colours of sponsor Gulf Oil International, will also be hoping for an opportunity in Formula One's first street race since 2019.

Williams, who have not scored for 31 races in a row, will also be hoping to pull something out of the bag as the former champions celebrate their 750th start.