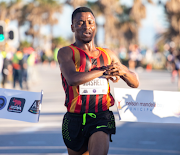 Image: Fabian Smith Gauteng's Precious Mashele stops his watch as he breaks the tape to claim his first national half marathon title at the Nelson Mandela Bay Half Marathon incorporating the SA Half Marathon Championships in Gqeberha on Saturday morning.

A blistering turn of pace in the final 500m saw Precious Mashele dethrone Stephen Mokoka to win his first national title in the Nelson Mandela Bay Half Marathon on Saturday.

Mashele took the crown home after crossing the line in 1:01.17 at the event that incorporated the SA Half Marathon Championships in Gqeberha in the first elite road race in SA since the Covid-19 pandemic shut the sport down from March last year.

In the women’s race, Kenya’s Brillian Kipkoech made it two wins out of two on SA soil when she won in a fast 1:07.32.

After a slow start, with a bunch of about 20 athletes going through the 10km mark in a time of 29:50, Mokoka surged ahead after the 15km mark taking Mashele with him as well as new kid on the block Mbuleli Mathanga and Kenya’s Felix Kibitok.

With just under 2km left, Mashele clawed his way back and passed Mokoka with 500m to go, an attack the former champion had no answer to.

The second half of the race was much faster as Mokoka ended second while up-and-coming Mathanga took six seconds off his personal best to finish third.

Kenyan Kipkoech, in only her second visit to SA, was favourite to win the women's race along with Namibia’s Helalia Johannes.

The duo lived up to their billing, setting a furious pace from the gun. However, the pace became too hot, even for Johannes, as she wilted under the relentless pressure of Kipkoech.

Diminutive Ethiopian Alemaddis Eyayu Sisay was able to stay with the smooth-running Kenyan, but even she had to give way as Kipkoech broke away with 4km to go.

Kipkoech broke the tape in 1:07.32, her third best time over the 21km distance while Sisay finished 32 sec later in 68:04 – setting a new personal best over the distance.

In the battle for the national title, Glenrose Xaba repeated her success from 2019, as the first SA woman over the line.

Mashele and Kipkoech pocketed R112,500 for their efforts.