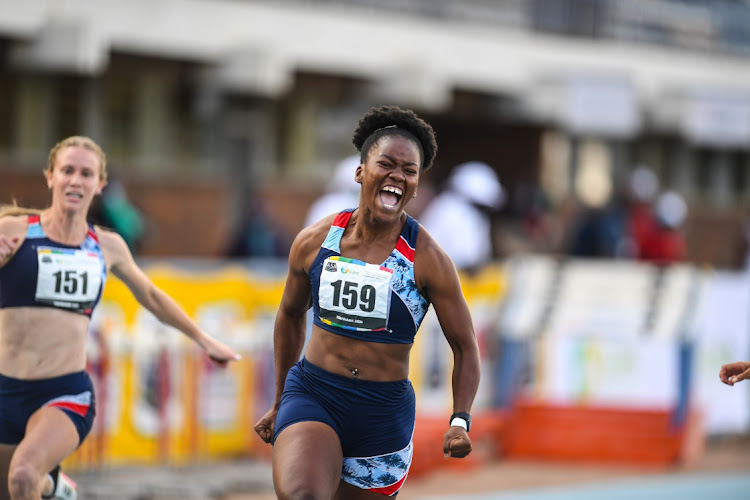 The feeling of winning the SA 100m women’s title at the SA Senior Track and Field Championships has not sunk in for Reabetswe Moloi. The soft-spoken sprinter has been around for quite some time but no one noticed her potential because she wasn't winning races.

The 25-year-old Sasolburg-born sprinter who won the sprint title on Friday, Day 2 of the national championships, says she spent the weekend watching the video of the women’s 100m final to check if she is not dreaming.

But the rise of the Free State athlete could not have been not forseen, judging by numerous podium finishes in either second or third place. When she stepped onto the Tuks Bestmed Athletics Stadium at the weekend her mission in heart was to be clear for all to see, that she is in this game to be a champion. Despite her believe in her ability, she admits she even surprised herself crossing the finishing in 11.55 seconds, her new personal best.

In 2019, she finished third in the nationals held at the Germiston Stadium. Three weeks ago, she secured a second-place finish at the Athletics Gauteng North (AGN) provincial championships at the Tuks stadium, a venue she is familiar with as a Pretoria-based athlete since school days.

Moloi completed her matric at Tuks Sport High School in 2013 and enrolled for a sports management course before dropping out a year later for personal reasons.

“I have won my first national gold medal and it still feels like a dream. I have been around since 2016 but I was not winning. I am hoping that my victory at the SA championships will open the door for me to win many titles and achieve big things in the sport,” Moloi told Sowetan yesterday.

In 2017, she was part of the #FillUpPotch, a campaign used to market the SA championships at the McArthur Stadium in Potchefstroom, where the packed venue wondered at the talents of stars such as Olympic 400m record holder Wayde van Niekerk and SA 100m champion Akani Simbine.

Moloi, however, still far from being a star herself, lost out in the semifinals.

After her feat at the weekend, Moloi now focuses on qualifying for the Tokyo Olympics in July, for which she must run a qualifying time of 11.52 seconds.

She is hoping to achieve on this mission at the African senior championships in Algiers, Algeria, from June 1-5.

“If the Olympics fall in my lap I will take it. I did not set a goal to qualify for the Games because things were hard for me during lockdown with no place to train and change of coaches. When I went into the season I did not think too much about the Olympics and have focused on the SA championships and the African championships. But my victory has changed everything now,” said Moloi.

Moloi is the second-born in a family of three children and says her parents support her running career.

“I am studying BCom law through Unisa. It is my first year. I can accommodate athletics on a full-time basis and also study.”

Looking at the performances of SA’s top athletes at the recently concluded SA Senior Track and Field Championships, there are indications that ...
Sport
1 year ago

SA golden girl Caster Semenya retained her national 5,000m title at the SA senior championships at the University of Pretoria yesterday.
Sport
1 year ago
Next Article