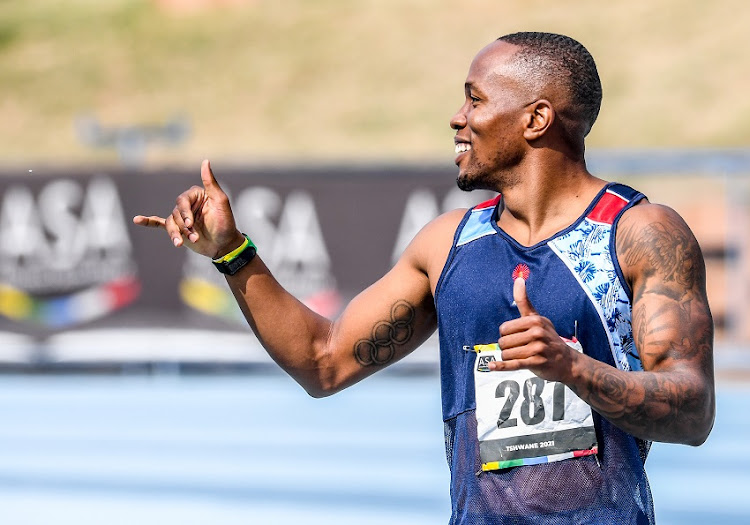 Akani Simbine clocked the fastest 100m by a South African at the SA championships in Pretoria on Thursday‚ but he was denied the national record by a gusting tail wind.

The holder of the 9.89sec SA mark blitzed down the Tuks stadium track in 9.82‚ only to hear that the 2.8 metre per second wind speed had denied him.

He had specifically targeted the lunch hour semifinal‚ in the heat of the day‚ because the final on Friday is later afternoon.

“I figured this would be perfect conditions‚ but the wind didn’t play along‚” a beaming Simbine said afterwards. “But I’m happy to dip so far under 9.9.”

Simbine clocked his record five years ago in the build-up to the Rio Olympics‚ where he finished fifth just three-hundredths of a second off the podium.

“I’m really hoping we can put it together this year [at the Tokyo Olympics]. It’s very important I do this.”

Gift Leotlela‚ running in a separate semifinal‚ went 9.94‚ but he too was denied by the wind. “I knew after my first race [in the morning] I can get there‚ but I still have to work to get there.”

Van Dyk threw a 59.47m personal best with her last attempt to clinch the victory‚ her first triumph over Viljoen.

“It was a fun competition. I got an injury two weeks ago‚ but it was a good thing because I got time to rest‚” said the 23-year-old dietician‚ the 2016 under-20 world championship silver medallist who won the SA senior title in 2018‚ when an injured Viljoen didn’t compete.

Rocco van Rooyen won the men’s javelin with a throw of 85.25m‚ the second time he’s been over the qualifying standard for the Tokyo Games.

In total 14 South Africans have posted automatic qualifying standards in individual events for the Olympics.

Johann Grobler‚ also a 2016 under-20 world championships runner-up‚ managed a best of 80.32 to finish second behind Van Rooyen.

Elroy Gelant‚ who has already qualified for the marathon‚ ended third in 29:42.34‚ unable to keep up with the pace.

Charl du Toit‚ a double gold medallist at the 2016 Paralympics‚ was delighted as he clocked 11.45 for the 100m‚ a time he said was the third fastest in the world in the past two years.

He’s also competing here in the 400m‚ the other event in which he made the podium five years ago‚ and the 200m.