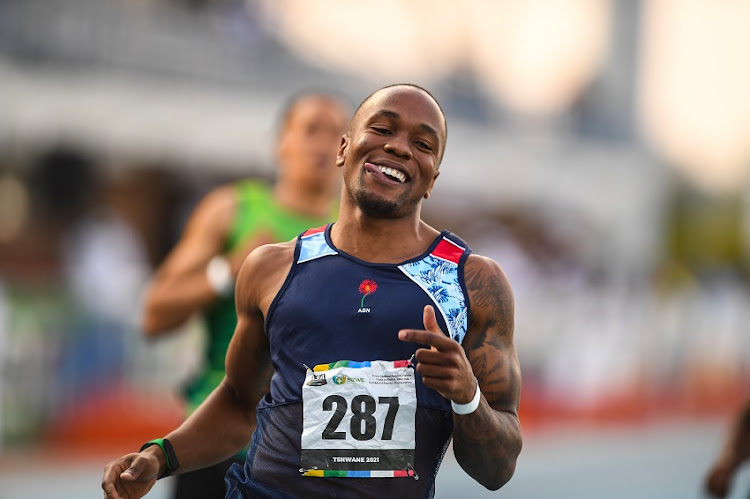 Akani Simbine scorched the 29th sub-10-second 100m of his career as he claimed the SA crown at the national championships in Pretoria on Friday afternoon.

The one-man blitzkrieg clocked 9.99sec to see off Gift Leotlela (10.16) and Thembo Monareng (10.33) at the Tuks athletics stadium.

“I came here to be SA’s number one‚” said Simbine‚ who ran a wind-assisted 9.82 in the semifinals on Thursday.

“I’m really happy that I could come out‚ run another sub-10 and finish the race healthy. It’s a big year to stay healthy‚ make sure we get to the main goal [Tokyo Olympics].”

What is of concern is the spate of injuries to SA’s sprinters earmarked for the 4x100m relay. On Friday Clarence Munyai was the latest victim‚ joining the likes Luxolo Adams‚ Simon Magakwe and Henricho Bruintjies on the sidelines.

They’re supposed to compete at the World Relays early next month.

Simbine was happy with his form as he prepares to head abroad.

While Simbine has achieved most of his sub-tenners at this venue‚ he’s actually achieved 19 of his feats overseas.

But there are plenty who think that this could be the year he cracks the Olympic podium‚ and he’s agreeing.

“I’ve been feeling like this last year. last year when I started the season I was like I’m going to make this best season of my life‚ and then we got hit by Covid.

“Then I had to switch my mind‚ let me make 2021 the best season of my life and work twice as hard as I worked before. Now I’m here and I have an opportunity to prove to myself that I’ve achieved the goals I set myself and just be a better athlete and better sprinter.”

In the shock of the day‚ Tiaan Kleynhans from Potchefstroom won the 110m hurdles crown after reigning champion Antonio Alkana hit the final hurdle hard and ended fourth.

Trained by former SA record-holder Shaun Bownes‚ he clocked 13.62 ahead of Rivaldo Roberts‚ veteran Ruan de Vries and then Alkana in 14.02.

“The wind was quite tough‚ especially mid-race when the feet pick up speed‚ but my coach had told me just to keep my form.

“I’m really pressing for Olympic qualification‚” he added. The automatic qualifier for Tokyo is 13.32.

Marjone Fourie took the women’s 100m hurdles crown in 13.54‚ a week after winning the national under-20 title.

Mire Reinstorf‚ 18‚ soared to a 4m personal best to win the women’s pole vault‚ the first time since 2009 that a South African woman had been beyond a 3m-high. It’s a discipline that has struggled in the country for too long‚ as evidenced by the 21-year-old national record of 4.42m held by Elmarie Gerryts‚ the first SA woman to clear 4m.