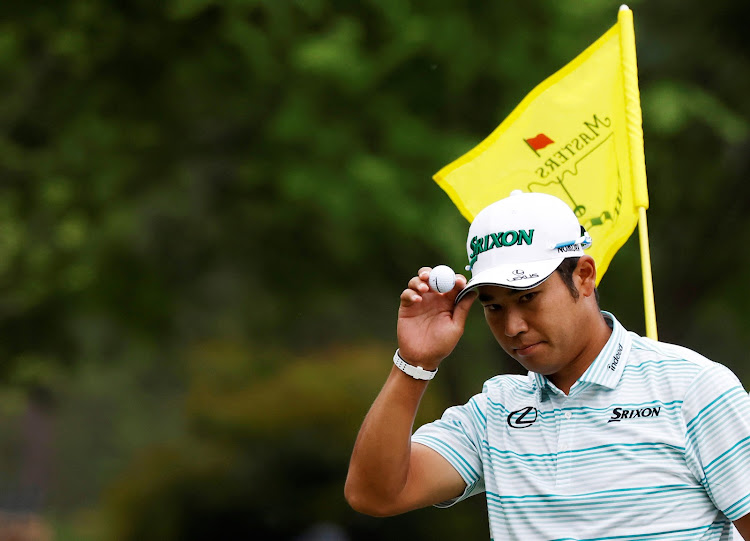 Japan's Hideki Matsuyama acknowledges the crowd after holing his eagle putt on the 15th green during the third round of the Masters at Augusta National Golf Club in Augusta, Georgia, in the US April 10, 2021.
Image: REUTERS/Mike Segar TPX IMAGES OF THE DAY

The coronavirus has kept all but a few Japanese reporters from the Masters, something that leader Hideki Matsuyama is very happy about.

Matsuyama is used to patiently enduring a microscopic level of attention that even Tiger Woods would find wearing, routinely answering a seemingly endless series of mundane questions after every round, whether shooting 65 or 75.

After shooting a spectacular seven-under-par 65 for a four-stroke lead in the third round at Augusta National on Saturday, he was honest enough to acknowledge that it was refreshing.

"I'm not sure how to answer this in a good way, but being in front of the media is still difficult," he said via his interpreter.

"I'm glad the media are here covering it, but it's not my favorite thing to do, to stand and answer questions.

"And so with fewer media, it's been a lot less stressful for me, and I've enjoyed this week."

No Japanese player has won a men's major, with Isao Aoki's runner-up to Jack Nicklaus at the 1980 US Open the closest call.

Also, Matsuyama was equal second at the 2017 US Open, though a distant four shots off the pace.

It is way too early to hand Matsuyama a Green Jacket.

The law of averages suggests one of the quartet tied for second will have a strong final round, but this could be a once-in-a-lifetime opportunity.

Four-shot leads in the modern era are hard to come by for players not named Woods.

Asked what victory on Sunday would mean to his nation, Matsuyama found an answer almost as good as the iron shots that he peppered the pins with on the back nine.

"I'm not sure how to answer the question. All I can do is prepare well, try my best, and do the best that I can tomorrow."