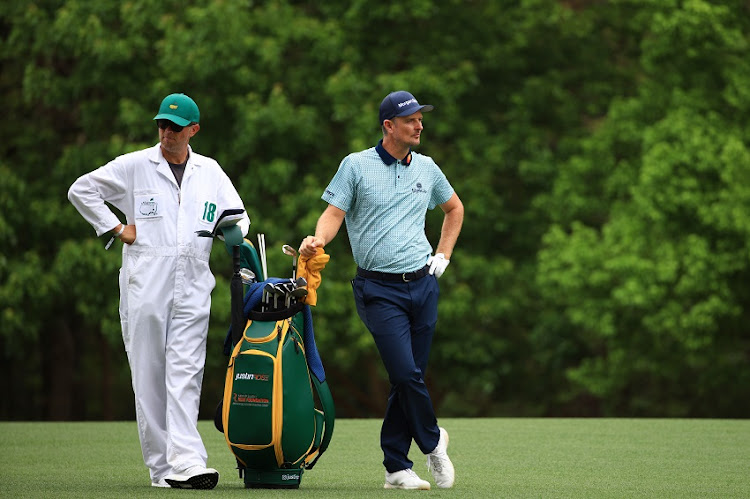 Justin Rose of England talks with his caddie David Clark on the 11th hole during the second round of the Masters at Augusta National Golf Club on April 09, 2021 in Augusta, Georgia.
Image: Mike Ehrmann/Getty Images

Justin Rose, bolstered by a late surge, led Masters debutant Will Zalatoris and Brian Harman by a shot after second round action at Augusta National on Friday while defending champion Dustin Johnson missed the cut by two strokes.

Rose, who withdrew from his last start a month ago with back spasms and began the day four shots clear, dug deep to overcome a tepid start with three late birdies for an even-par 72 that left him at seven under on the week.

"It was a worthwhile day for me. And not having played for a month, and to suddenly find yourself in the situation I was yesterday, it's - I'm not kind of brimming with confidence right now in that sense," said Rose.

"So today was always going to be a challenging day. I felt like in the end, I felt like I grew a little bit from today, which is good."

Rose reached the turn in three-over 39 and watched his lead evaporate but the two-times Masters runner-up did not panic and instead saved his best for last.

The 40-year-old Englishman reclaimed his lead with birdies at the par-five 13th, where he tapped in from four feet, and at the par-four 14th where he rolled in a 23-footer. Rose went on to birdie the par-three 16th.

But Rose will have his work cut out for him as a number of players took full advantage of favorable scoring conditions and pin positions to put themselves firmly in the mix.

Zalatoris (68), a 24-year-old American who gained late entry to the Masters with his top-50 world ranking, stormed home with three consecutive birdies to sit alone in second place before Harman (69) joined him after birdies at his final two holes.

Jordan Spieth (68), who arrived at Augusta National fresh off a win last week, holed a 30-foot birdie putt at the 17th hole and was in a two-way share of fourth place with Australian Marc Leishman (67).

"I'm happy that the golf course has the opportunity to play more and more difficult over the weekend," said Spieth. "I'm looking forward to that kind of challenge, and I think that could be an advantage to me if I'm in control of the ball."

World number two Justin Thomas (67), who has improved in each of his five Masters starts and finished fourth last year, capped his round with a three-putt bogey that dropped him back into a pack of six golfers three shots back of Rose.

Among those level with Thomas is South Korean Kim Si-woo who putted with his three-wood for the final four holes, making par on each, en route to a three-under-par 69.

Kim bogeyed the 14th and then, after his chip at the 15th rolled well past the cup, broke his putter when he slammed it head-first into the ground while waiting for his playing competitor.

"Just frustration," said Kim. "Just that's not on purpose, but it was broken, yeah."

U.S. Open champion Bryson DeChambeau (67), who missed his targets by wide margins during the windy opening round, flirted with the cut line until he turned things around late with four birdies over his final six holes.

DeChambeau, who last November failed in his bid to overpower Augusta National when he was the pre-tournament favorite, will head into the weekend eight shots off the lead.

"I don't think you can ever figure this place out," said DeChambeau. "There's so many things going on around here. The wind makes it diabolical."

World number one Johnson (75) looked like he might sneak into the weekend until a bogey at the 17th where he missed an eight-foot par putt.

Johnson, needing a birdie at the last hole, found a fairway bunker with his tee shot and failed to reach the green with his second and settled for a closing bogey that dropped him to five over on the week.

Northern Irishman Rory McIlroy (74) did not come close in his seventh bid to complete the career Grand Slam of golf's four majors with a missed cut at six over on the week.

Among some other notables to miss the cut were four-times major winner Brooks Koepka, Lee Westwood, Patrick Cantlay and Jason Day.

Matthew Wolff, who was also well outside the cut line, was disqualified after he returned a scorecard with a hole score lower than he actually made on the par-four 17th.