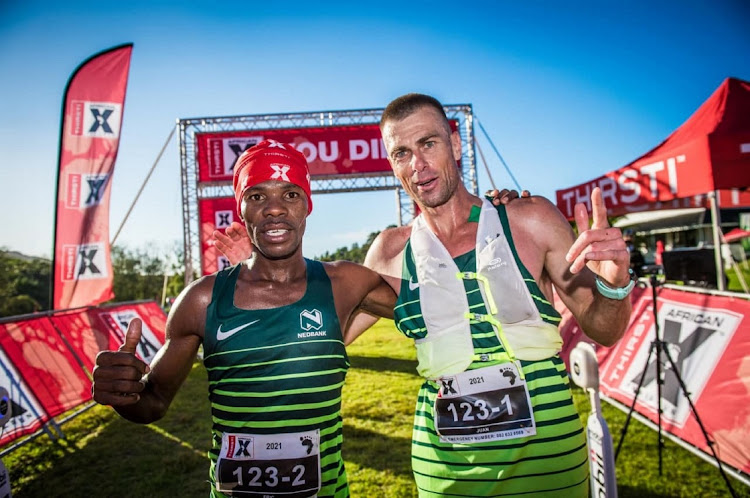 Although Eric Ngubane and Juan van Deventer had to settle for a fourth place Stage Three finish yesterday, the lead  they had built after Stage One and Two of SA’s premier three-day, three-stage race was enough to secure them the coveted tile of Thirsti AfricanX Trail Run champions.

“Stage Three was interesting,” laughed Van Deventer. “We tried to mark Lloyd [Bosman] and Ettienne [Plaaitjies]. At about 17km, they made a hell of a move and we just had to hang in there and fight until the finish, which we did. We knew that we had a good lead, so we ran strategically as we didn’t want to burn out in the beginning. The last three kilometres they kind of went out of sight, but we still managed to see them every now and again, so we knew that we were still close enough to take the overall victory.”

Ngubane said: “Coming into the race we knew that there was no need for us to break ourselves. We just needed to protect our position. We wanted to win the title. This trail run was very well organised, the routes were well-marked and the marshalls cheered for us every day.  That’s what we are here for. We enjoyed mixing it up with guys who mostly do road races. It means a lot to be the 2021 champions.”

Ngubane and Van Deventer (Nedbank 1) completed the three stages of the trail run in an impressive combined time of five hours, eight minutes and 36 seconds.

The only team to claim all three stage victories at the Thirsti AfricanX Trail Run, Vicky van der Merwe and Danette Walley (STS), obliterated the field in the women’s team category.

“Today was so nice,” said Van der Merwe. “We went out with a plan, but things didn’t really go according to that plan. The Nedbank girls ran hard especially on the downhill, they basically sprinted flat out. We literally caught them with 400m to go.”