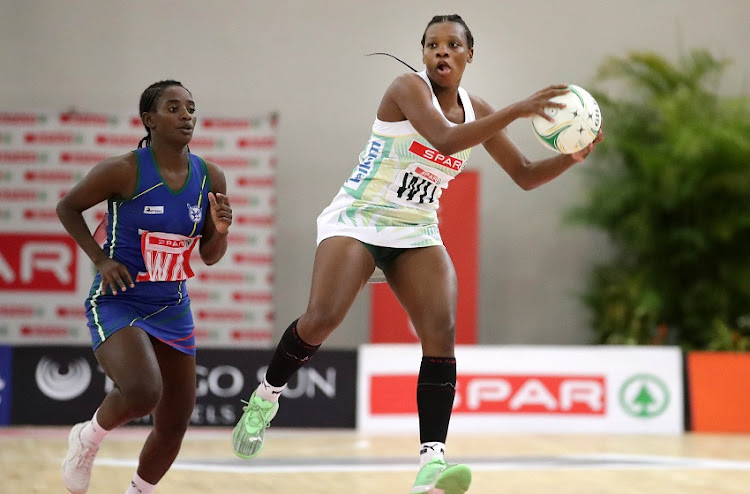 Khanyisa Chawane of South Africa in action against Namibia during the SPAR Challenge. The SPAR Proteas beat Namibia 58 – 30 in the first match played on Thursday, 25 March 2021 at the CTICC, Cape Town in Western Cape Province.
Image: Reg Caldecott

Netball Proteas began the Spar Challenge Tri-Nations tournament with a 58-30 over Namibia at the Cape Town International Convention Centre on Thursday morning.

Netball Proteas began the Spar Challenge Tri-Nations tournament with a 58-30 over Namibia at the Cape Town International Convention Centre on Thursday morning.

South Africa‚ who led 32-15 at halftime‚ plays their second of the series against stronger Uganda on Thursday evening (6pm) at the same venue.

In the win over Namibia‚ who did not offer too much resistance‚ Badenhorst managed use all 12 members of the squad where inexperienced players got much needed game time ahead of the more challenging match against the She Cranes of Uganda in the evening.

“We played well for a first game‚” said Badenhorst after the win over Namibia.

“Our conversion rate from centre pass was good‚ but there were still a lot of mistakes. The team needs to adapt to the new circle players without regulars like star shooter Lenise Potgieter.

“I was pleased with the performance of the new caps. They will have got rid of some of their jitters‚ which is important‚ because this evening’s match against the Uganda She-Cranes will be a different story.”

Badenhorst also praised the Namibian Debmarine Desert Jewels by saying they were an exciting up and coming team.

Namibian coach Julene Meyer was frustrated at the number of unforced errors from her team.

“We were conceding between six and eight goals a quarter because of unnecessary mistakes. I think we are still in third gear‚ we need more exposure to the speed and intensity of a match against one of the world’s top teams‚” said Meyer.