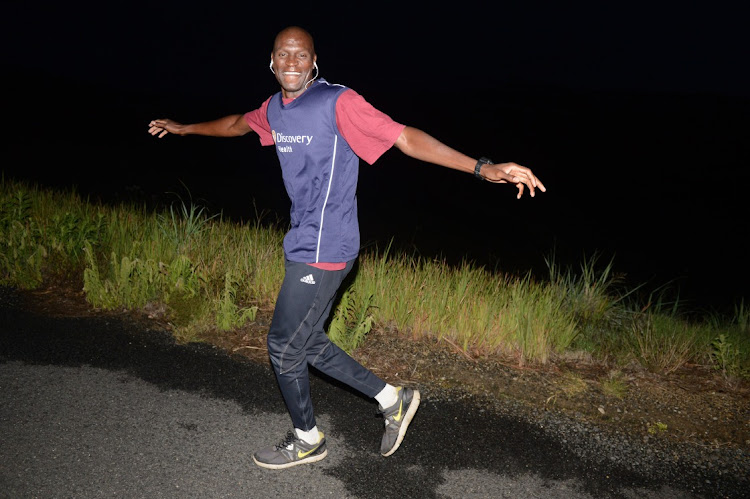 Hendrick Mokganyetsi during the Sports Heros Walk against AIDS walking from Town to Town raising awareness around Carolina on November 27, 2014 in Mpumalanga.
Image: Gallo Images

Newly elected Gauteng Athletics North (AGN) president Hendrick Mokganyetsi is ready to get down to business. The three-time Olympian said it is time to get his hands dirty and serve the athletes after he was voted in as the new AGN boss at the weekend.

The 45-year-old upset favourite John Mathane to win the AGN presidency at the Pilditch Stadium on Saturday.

The Tshwane University of Technology athletics coach received 62 votes four more votes than what Mathane collected to win the race for the presidency. Mathane, who is a sports coordinator at the department of correctional services in Tshwane, said he would not relinquish any of the roles that he did before he won the presidency.

“The AGN presidency is not about me, but about the team that I serve with. I will not stop coaching at TUT or working at the correctional services. I will serve AGN and take it to new heights. But I cannot do this alone," Mokganyetsi told Sowetan.

He said he was willing to work with his rival Mathane, who is now a board member of AGN. Mathane lost all the three positions that he was contesting and is now an ordinary board member. “I will work with everybody, including Mathane. It is about the province and athletes and the coaches, not individuals. I do not have time to waste as I have to start my work to implement the things that I promised the people in my manifesto," said the jubilant Mokganyetsi.

In his manifesto, he said that he would prioritise development and talent identification. He promised to bring in new sponsors, increase the prize money of local competitions, and make the youth fall in love with road running events again. The ball is now in his court and all eyes are on Mokganyetsi to deliver on his promises. His first assignment is to make sure that Athletics SA (ASA) hosts successful SA senior championships at the Pilditch Stadium next month.

AGN is the host province and Mokganyetsi is tasked with the responsibility of working with the ASA officials to make sure that the event becomes a success.

Meanwhile, Mathane congratulated Mokganyetsi and said that he would not resign and would serve under him in the next four years.

While Hendrick Mokganyetsi and his team are hard at work campaigning for his Athletics Gauteng North (AGN) presidential ambitions, his main rival, ...
Sport
1 month ago

Three-time Olympian Hendrick Mokganyetsi has big plans for Athletics Gauteng North (AGN), and he intends to make it the best provincial athletics ...
Sport
1 month ago
Next Article