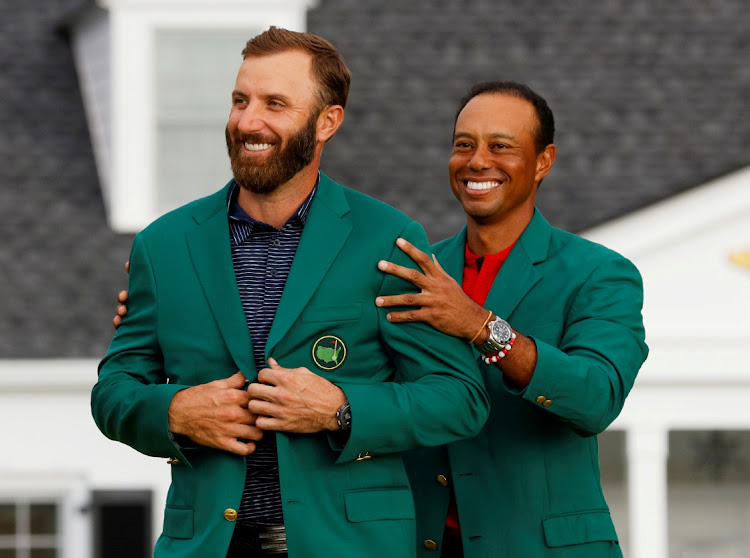 Dustin Johnson of the US is presented with the green jacket by Tiger Woods after winning The Masters at Augusta National Golf Club on November 15, 2020
Image: Brian Snyder / Reuters

Dustin Johnson, who fulfilled a childhood dream by winning last year's Masters, said on Tuesday he does not feel short-changed that his status as reigning champion could end after five months as opposed to the usual year.

Last year's Masters was held in November instead of April because of the Covid-19 outbreak and, barring a successful title defence next month, Johnson will slip the winner's Green Jacket on a new champion at the year's first major.

"It wouldn't bother me if I only had it for a day. It would be okay," Johnson, who as a Masters winner has access to the Champions Locker Room at Augusta National Golf Club for the rest of his life, said on a conference call with reporters.

"I've got one, and five months, a year, one month, a day, it doesn't really make a difference to me."

Johnson's five-shot victory at Augusta National was the largest winning margin at the Masters since Tiger Woods won by 12 in 1997 and his 20-under-par 268 broke the previous 72-hole Masters record that was also held by Woods.

But with this year's Masters back in its usual spot on the calendar, Johnson does not expect scores to be as low as they were in November when players were able to be more aggressive with longer clubs because they held the green.

"If it's soft again, yeah, you'd be able to shoot some low scores," said Johnson, who returned to Augusta National two weeks ago for the first time since his Masters win. "But if it's firm and fast like I have a feeling it's going to be, the golf course plays way different and way more difficult."

Johnson, who won the European Tour's Saudi International in early February, has not been in contention in his last two PGA Tour starts and is coming off a share of 48th place at the Players Championship where he said he made many mental mistakes.

Johnson will now look to find his form in time for the April 8-11 Masters where he will try to join Jack Nicklaus, Nick Faldo and Woods as the only players to successfully defend their Masters victories.

"Obviously the game is not quite in the form that I would like it to be in right now, but I've got plenty of time to get it back in order leading up to Augusta," said Johnson.

Meanwhile, Tiger Woods said on Tuesday he is back home and continuing his recovery after suffering severe leg injuries in a car accident last month.

"Happy to report that I am back home continuing my recovery," the 45-year-old golf great said on Twitter.

"I will be recovering at home and working on getting stronger every day."

The one-car crash left the 82-time PGA Tour winner with a fractured right leg and shattered ankle and stunned the world of sport and beyond, with former US Presidents Donald Trump and Barack Obama among those who offered support.

"I am so grateful for the outpouring of support and encouragement that I have received over the past few weeks," said Woods.

The Los Angeles Police Department said earlier this month it was investigating data from the "black box" recorder inside the car driven by Woods but have said the incident was an accident.