Ace not happy with winning time at CGA meeting

Mphahlele thrilled to have edged Mothibi 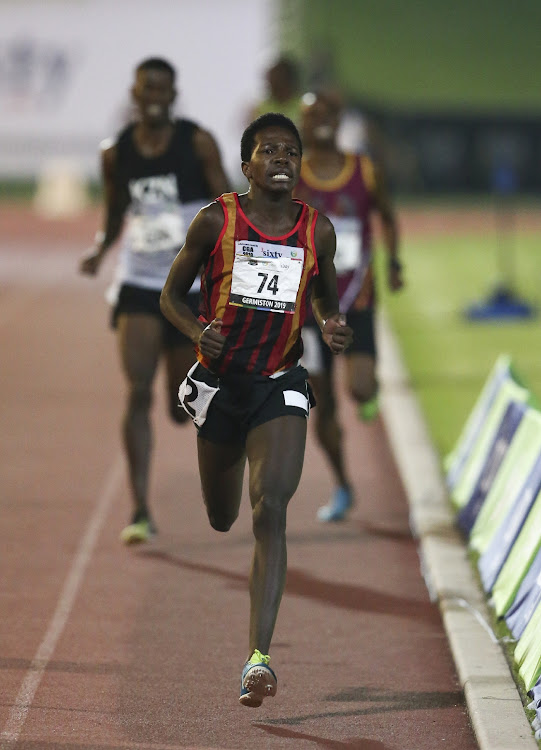 Despite winning his first track and field meet this season, SA middle-distance runner Ryan Mphahlele was not happy with the winning time.

The bubbly runner clocked 08:16.64 to win the men's 3000m at the Central Gauteng Athletics (CGA) meeting at the Boksburg Stadium at the weekend.

Comrades Marathon champion Edward Mothibi, who was the guest runner at the CGA meeting, secured a seventh-place finish in 08:32.04. The Nedbank Running Club star was using the event to work on his speed with most of the road races around the country either postponed or cancelled.

Mphahlele, of the Tembisa Athletics Club, finished ahead of Simon Sibeko of Quitec, who registered 08:25.75 to take home the silver medal, while former Soweto Half Marathon champion David Manja had to settle for bronze with a time of 08:27.19.

“I did not realise that I was running against Edward Mothibi and only found out after the race. If I knew it, that would have intimidated me. I hope I gave him the speed that he needed. I did not know that Comrades Marathon runners could do 3000m. But I was not happy with my winning time, even though it was my first race,” Mphahlele told Sowetan yesterday.

He said he and his coach Elvis Khoza are still working on his fitness level. “It’s all about the fitness level and it is picking up slowly. It is all about training and we hope to be in top shape at the SA Championship next month. We have not yet qualified for the Olympics and we will try in the 15000m,” said the Adidas sponsored athlete.

The Tembisa-born athlete completed matric in 2015 and wanted to become a professional athlete. However, the Covid-19 pandemic has taught him a big lesson and he is now considering furthering his studies.

“Covid-19 taught me certain lessons. I am a professional runner, but that is not enough. I want to do something about my life apart from running,” Mphahlele added.

Meanwhile, Mine de Klerk broke the under-19 discus record of 35.07m that Simone du Toit had held for 15 years. De Klerk threw a distance of 35.32m to win the final. The record had stood since 2006.

Makhanya gets chance for shot at the Olympics

Mapaseka "Speedster" Makhanya received a dose of good news from her sponsors Nike yesterday. The sports apparel giant is in the process of arranging ...
Sport
1 month ago

Winning start for Mashele as track and field returns

Central Gauteng Athletics (CGA’s) first track meeting of the season lived up to expectations. The meeting was attended by six athletes from Qatar, ...
Sport
2 months ago
Next Article