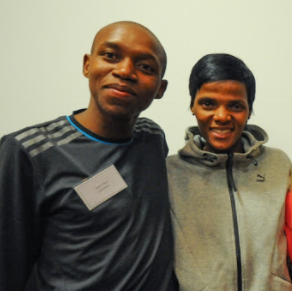 Outspoken athletics couple Gladwin Mzazi and Lebo Phalula had a weekend to remember at the Central Gauteng Athletics (CGA) track and field meet when they dominated the podium at the Boksburg Stadium on Saturday.

Mzazi and his wife won the men's and women's 5,000m races to clinch the gold medals. When Athletics SA (ASA) suspended its national events for two weeks due to the second wave of the Covid-19 pandemic last month, Mzazi did not hold back criticism aimed at the national athletics governing body – and was supported by his wife Phalula.

But their wish to return to the track was granted when the races were opened three weeks ago and they have fully capitalised on the decision.

After weeks of frustration, Athletics SA (ASA) has written to its members to confirm the re-opening of roadrunning events across the country from ...
Sport
1 year ago

The couple dedicated their victory to their three-year-old daughter Olwethu. The CGA second meeting was organised under strict Covid-19 regulations, with athletes wearing masks after racing and social distancing in place.

Mzazi said he has nothing against ASA and all that he wants is to run and stand a better chance of qualifying for the Olympic Games in the 5,000m and 10,000m races.

“Yes, I complained a lot and I am happy to be back racing and winning again. The race was part of the SA senior track and field championships in Pretoria in April. My wife and I want to qualify for the Olympic Games,” said Mzazi.

Mzazi went for a morning jog with his training partner and wife yesterday and said they celebrated their victory with a nice dinner.

“Wifey and I went for a jog. We have five weeks before the SAA champs and both of us are dreaming of going to the Olympics,” Mzazi told Sowetan yesterday.