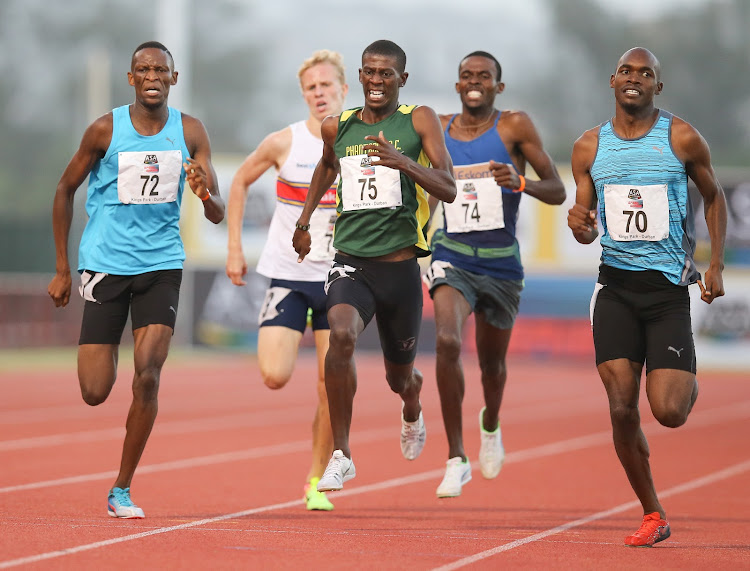 Rantso Mokopane (72), Nkosinathi Sibiya (75) and Jerry Motsao, battle it out for the finish line in the mens 1500m during the ASA Speed Series
Image: Roger Sedres/Gallo Images

Athletics Gauteng North's (AGN's) request for the Athletics SA deadline for the nomination of candidates for the national elections to be moved has been granted by the sport's governing body.

AGN wrote to ASA to extend the deadline from March 3 to allow them to elect a new board on Sunday at the Pilditch Stadium in Tshwane.

The provincial athletics body will reveal the list of candidates standing for the 11 positions on the AGN board on Saturday. When AGN holds its elective meeting on Sunday, 209 members will cast their votes to elect a new board.

AGN president John Mathane is standing for a third term.

ASA held a board meeting to discuss the request from AGN and the suspension of KwaZulu-Natal Athletics (KZNA) last week. AGN and KZNA members are not in good standing and have to elect a new board to be eligible to enter the elections. KZNA is under administration and the rules forbid them from contesting the elections without an executive.

According to the ASA constitution, clubs must nominate members in good standing and the province must endorse the nominations.

The new deadline is April 7. The elections will take place at the Southern Sun Hotel in Kempton Park. AGN will not be able to contest the national elections without a new board.

Mathane confirmed that ASA granted them their request and they will focus on their regional elections this week. “We are forging ahead with our elections and are happy that the deadline for nominations has been extended. It's good news for us. We will wear our masks, sanitise and take temperatures of everyone attending the elections,” said Mathane.

Athletics Gauteng North (AGN) paid its athletes up to R3,000 each in Covid-19 relief funds to help them put food on the table.
Sport
8 months ago

Even though he did not confirm whether he would contest the Athletics SA (ASA) elections in May, ASA president Aleck Skhosana said yesterday he has ...
Sport
8 months ago
Next Article