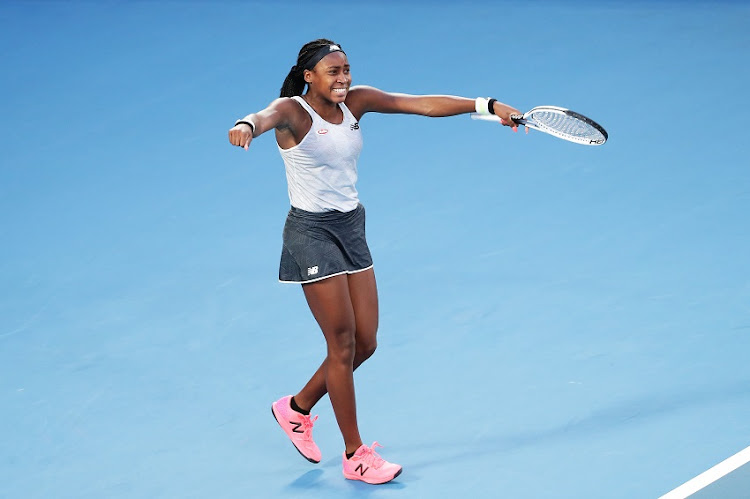 The tournament is one of a slew of warmups being played at Melbourne Park in the run-up to next week's Australian Open, organised by Tennis Australia.
Image: Matt King/Getty Images

Coco Gauff was rusty on serve and struggled to produce her best tennis but the American prodigy prevailed 6-3 6-7(6) 7-6(5) over Swiss Jil Teichmann to reach the second round of the Gippsland Trophy in Melbourne on Monday.

Serving for a 5-2 lead in the second set, 16-year-old Gauff was broken with a double-fault and world number 57 Teichmann, 23,  scrapped hard to level the match at the Margaret Court Arena at Melbourne Park.

Gauff ramped up the pressure in the deciding tiebreak, however, to book a clash with Briton Katie Boulter in the WTA 500 event, one of a slew of warmups being played at Melbourne Park in the run-up to next week's Australian Open.

"It was definitely a challenging match I feel like for both of us," said Gauff. "This (second) tiebreak, I was just focused on making her play."

World number 48 Gauff, touted as a potential successor to American great Serena Williams, claimed the biggest victory of her young career at her Australian Open debut last year, knocking out defending champion Naomi Osaka before falling to eventual winner Sofia Kenin in the fourth round.

It was Gauff's second appearance in the second week of a Grand Slam before her 16th birthday, having made the fourth round at her Wimbledon debut in 2019.

Third seed Elina Svitolina eased into the last 16 on Monday with a 6-1 6-4 win over Andrea Petkovic.

Top seed Simona Halep beat Anastasia Potapova 6-4 6-4 in the evening session and said she was pleased to get the win in her first competitive match since the French Open in October.

"I just wanted to feel the court, feel the game. I knew it was going to be a difficult match, she hits very strong," Halep said in a post-match interview.

"It was not easy, but I tried my best and I'm happy to go through."