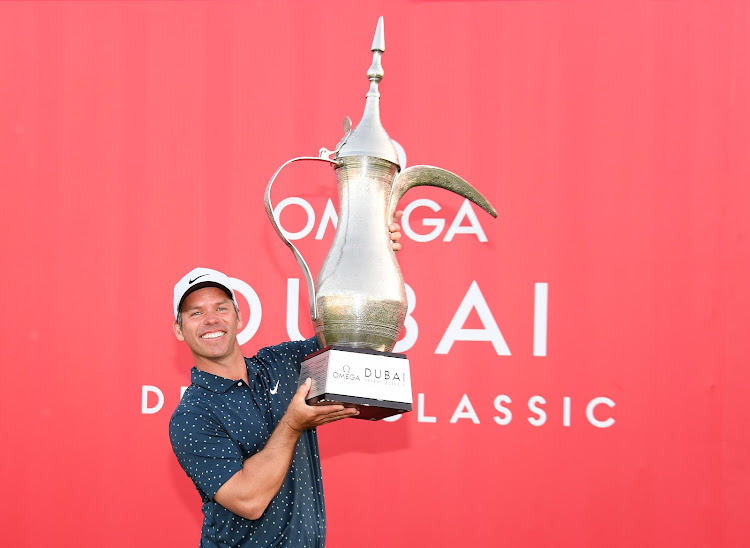 Paul Casey of England with the winners trophy on the 18th green after the final round of the Omega Dubai Desert Classic at Emirates Golf Club on January 31, 2021 in Dubai, United Arab Emirates.
Image: Ross Kinnaird/Getty Images

England's Paul Casey claimed his 15th European Tour title after a closing round of two-under-par 70 handed him a dominant four-shot victory at the Dubai Desert Classic on Sunday.

Casey has previously lifted trophies in the United Arab Emirates with victories in Abu Dhabi in 2007 and 2009 and he made it a hat-trick in the desert at the Emirates Golf Club with a score of 17-under, four clear of South Africa's Brandon Stone.

The 43-year-old also boosted his chances to make a fifth Ryder Cup appearance in September, with the Dubai triumph tying him with 2018 European captain Thomas Bjorn and current skipper Padraig Harrington for Tour wins.

"It's very, very special," said Casey, whose latest Tour triumph comes 20 years after his first. "It's an unbelievable roster (of winners). That's so cool, I've worked so hard.

"I feel like I've regained my youth, I mean that sincerely," said the 43-year-old.

Starting with a one-shot advantage, Casey struck two birdies and two bogeys for a level-par 35 on the front nine to extend his lead to three strokes, with Stone bogeying three of his opening seven holes.

Stone recovered with three quickfire birdies on the back nine but Casey never looked in danger as he cruised to victory that will move him back into the top 20 when the world rankings are updated on Monday.

Scot Robert MacIntyre finished third at 12-under after carding four consecutive bogeys in a round of 74, while England's Laurie Canter and Finland's Kalle Samooja were tied for fourth a further two strokes behind.