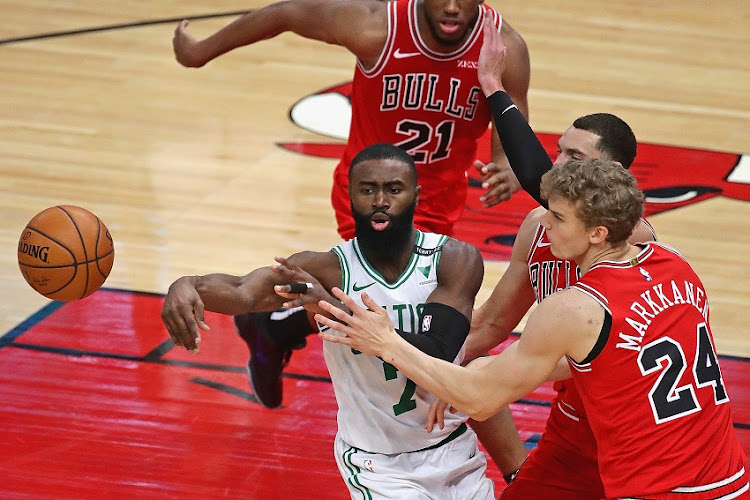 Jaylen Brown #7 of the Boston Celtics passes under pressure from Lauri Markkanen #24 and Zach LaVine #8 of the Chicago Bulls at the United Center on January 25, 2021 in Chicago, Illinois.
Image: Jonathan Daniel/Getty Images

Jaylen Brown scored 26 points and Jayson Tatum added 24 points in his return to the lineup from the NBA's COVID-19 protocol as the visiting Boston Celtics opened a stretch of playing seven of eight on the road with a 119-103 victory against the Chicago Bulls on Monday night.

Marcus Smart registered a double-double of 13 points and 11 assists and Daniel Theis added 19 points for Boston, which has won successive games following a three-game losing streak.

After leading by 10 at the break, the Celtics seized control after halftime, opening the third quarter on a 14-2 run en route to a night of 50.6 percent shooting.

Chicago's Zach LaVine had a game-high 30 points on 11-for-19 shooting as the Bulls fell to 0-2 on their five-game homestand. Limited to a season-low 90 points Saturday in a loss to the reigning NBA champion Los Angeles Lakers, the Bulls eclipsed that total Monday while committing 19 turnovers that led to 35 Boston points.

After going 2-for-8 from the free throw line in the first quarter, the Bulls returned only twice after that, making both attempts.

Playing for the first time since he was placed on the league's COVID-19 protocol on Jan. 9, Tatum went 10-for-21 from the floor in 31 minutes. He added four rebounds, five assists and one block with just two turnovers.

Boston led 60-50 at halftime, shooting 47.9 percent in the first half compared to 45.5 percent for Chicago. Smart led four Celtics in double figures with 13 points while LaVine topped Chicago with 11.

For the night, the Bulls shot 46.6 percent from the floor.

The Bulls were slated to host the Celtics on Jan. 12, but the game was postponed as Boston dealt with COVID-19 concerns.