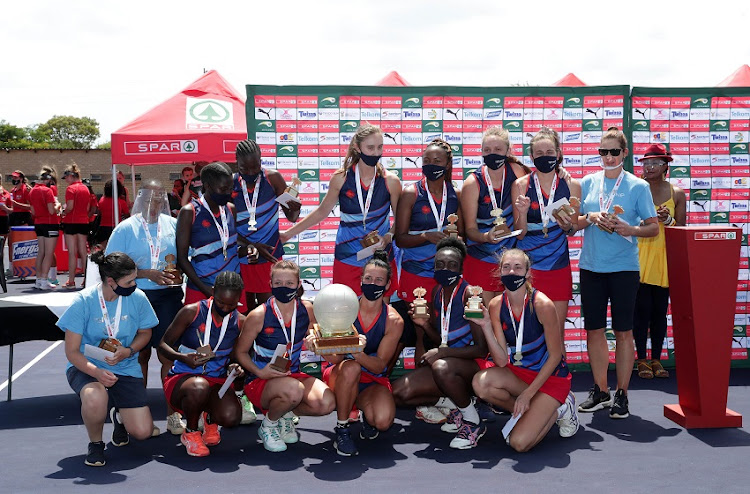 Tshwane players and officials celebrate with the Spar National Netball Championships trophy after they defeated Dr Kenneth Kaunda 44-39 in the final in Bela-Bela on Saturday.
Image: Reg Caldecott

Tshwane defended their Spar National Netball Championships with a hard fought 44-39 victory over Dr Kenneth Kaunda (Dr KK) during their entertaining encounter in Bela-Bela on Saturday.

In what was a repeat of last year’s final‚ Tshwane dominated from the start and by the end of the first quarter they enjoyed a slender 14-11 after a spell where they ahead largely through attackers Ine-Mari Venter and Jeanette Vermuelen.

When the match reached halftime‚ Tshwane had stretched their lead to a narrow 26-20 where they managed to get the better of the Dr KK defence that was marshaled by inspirational Didintle Keebine and Monique Reynecke.

Tshwane dominated the last two quarters of the match for their third successive championship but Dr KK‚ who had six U21 players in their team‚ can hold their heads high because this was their only defeat in the competition.

Victorious coach Jenny van Dyk said it was all about hard work in preparation and on court and she did not allow rain that delayed the start of the match to disrupt their processes.

“I told the players that if we get to play the match we will win and they should keep their focus because if the rain stopped we will have to play the match and they need to be ready. I felt that we were in control for the rest of the match and we knew that we will come through and I am proud of the girls because we have won this competition for three consecutive years.”

Dr KK coach Dr Elsje Jordaan was gracious in defeat. “It is disappointing because you want to play in finals. I sad t to the players that you don’t win a silver medal but you lose a gold medal. I am really pleased with the way we played the in final. My 19-year old shooter had a good goal average which is fantastic. But‚ compliments must go to Tshwane and congratulations to them on winning the gold medal.”

After the competition‚ national selectors picked eighteen players in the seniors and U21 categories who impressed. Senior players will be in the reckoning for selection when coach Dorette Badenhorst selects the squad for the three match series against Uganda in Cape Town in January.