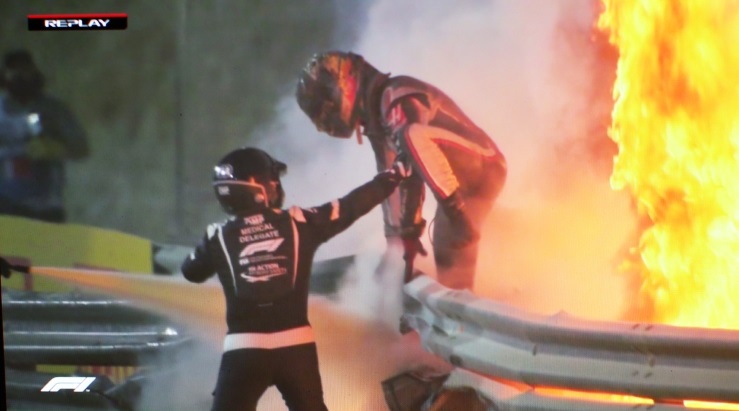 Romain Grosjean of France and Haas F1 is pictured on a screen escaping his crash during the F1 Grand Prix of Bahrain at Bahrain International Circuit in Bahrain, November 29 2020.
Image: GETTY IMAGES/ PETER FOX

Daniel Ricciardo blasted the “Hollywood” coverage of Romain Grosjean's fiery Bahrain Grand Prix crash on Sunday and said he was disgusted by Formula One showing endless replays while drivers were waiting for the race to restart.

Grosjean was lucky to escape with his life after his Haas car speared through metal barriers, splitting in two and bursting into flames.

“And then, like that’s not enough, they go to his on-board,” Australian said.

Ricciardo said Formula One, whose commercial rights are owned by US-based Liberty Media, was lucky it was not having to deal with a very different story.

“To show it like it’s something from Hollywood, is not cool. Choose to do that tomorrow, but not today.”

Asked to comment, a Formula One spokesperson pointed to established procedures and protocols whereby replays of any serious accident are run only once race control has confirmed the driver is safe.

If that is not the case, then nothing is shown.

Mercedes' Valtteri Bottas agreed the replays had been disconcerting.

“I feel like people, spectators want to see it. But there’s a limit as well,” the Finn said. “It could have been a fraction different, the shunt, and there would have been no way for him to get out of the car.”

Mercedes team boss Toto Wolff said the images were frightening but “if you're not transparent as an organisation, you're just taking the risk that somebody else shows stuff that is beyond your control”.

The race at Sakhir was halted and delayed for an hour and 20 minutes after the first lap crash with track workers having to remove the metal barrier and replace it.

Haas said Grosjean was staying in hospital overnight after suffering burns on the back of his hands. — Reuters

Lewis Hamilton has said becoming the most successful Formula One driver of all time means nothing unless he can help tackle racism and push for ...
Sport
1 year ago

Britain's Lewis Hamilton took a record-equalling seventh world championship and became Formula One's most successful driver of all time after winning ...
Sport
1 year ago
Next Article