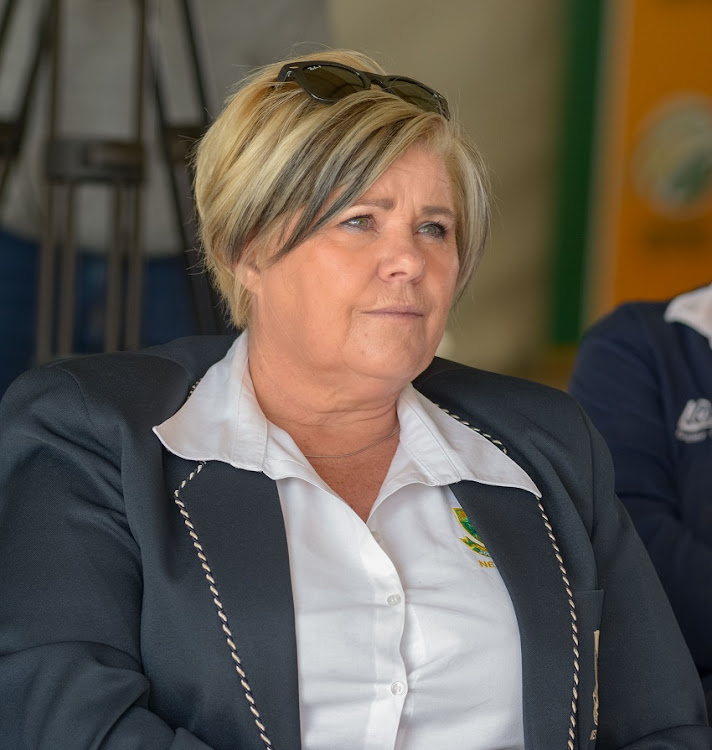 In a letter that TimesLive has seen Tsakane Mbewe and Palesa Mbukwana explain how they were asked to make their dresses longer as per the alleged directives of Du Preez because they did not look good on television.

“On Monday 19 October 2020‚ our team manager Maria Cato called three players into her room and requested that they bring their playing dresses with‚” wrote Mbewe and Mbukwana in their detailed letter.

“The three players being myself Tsakane Mbewe together with Maryke Coetzee and Palesa Mbukwana. When we got there‚ we asked her why we needed to bring our dresses in. Our manager replied that she needed to make our dresses longer as per NSA directives from Vice President Ms Christine du Preez.

“She further indicated that Ms du Preez instructed her to make a plan with our dresses and fix them as they were too short and it didn’t look good on TV and that if she didn’t to do anything about it we would be disqualified and sent home.”

Du Preez said she consulted the players as soon as she was aware of their unhappiness.

“When I was made aware of these particular girls feeling how they were feeling‚ I made arrangements straight away to go and see them. I think it was within an hour of me hearing how they felt and I went to see them‚” NSA’s vice president said.

“We assured them that was not the reason or the purpose of NSA. We want all our players to be happy hence we send the kit to team managers a week or so before the tournament so that they can make alterations wherever they are necessary.

“Dresses all come from overseas because our sponsor is an international brand and they are not locally produced. That on its own is a challenging.

“The bigger thing that needs to be stated is that the kit is ordered 18 months in advance and that is according to the sponsor’s prerequisite. I think the Sunbirds squad was only announced two weeks before the TNL started‚ so with that there is already a crisis with all the teams because nobody knows who is going to be in the team.

“The kit was delivered about a week before the tournament for them to make the necessary alterations and they were given additional dresses‚” said Du Preez.

Furthermore in their letter‚ Mbewe and Mbukwana said the episode made them angry and affected their performances before their team was disqualified for failing to adhere to tournament regulations.

“This issue made us very angry because we felt that we were being singled-out and body shamed. How can we be asked such while there are other players that are wearing short dresses‚ some even shorter than ours‚ but they were never told or issued with the same directives by NSA.

“What makes it more painful is that we never received sample sizes so we ordered based on what we usually wear on a day-to-day basis. When our captain Faith Motau tried on her dress‚ she immediately told us that the cuts are small.

“We tried to change our sizes but they had already been sent through. So we cannot understand how having smaller dress sizes can be our fault.

“The way we were treated made us seem as though we caused the issue. This really affected our play especially Palesa Mbukwana because her dress was very long‚ below knee length‚ after alterations and people started taking pictures of her in the dress and she was ridiculed on social media and TV.

“We are not happy about what NSA did to us as players. We felt victimised and discriminated against based on the size or shape of our bodies.

“NSA kept quiet about our dress issue during the whole of first round of the league and never said anything about our dresses but complained when we were going for round two.

“Why wait until round two? This further makes us question the timing and real intentions of this directive.

“The vice president further said that the whole country is looking at us and that people looking after sponsors are the ones sending her pictures and saying to her she must ‘fix it’.

“She said this year that there are a lot of big girls‚ saying that she’s also a big girl with ‘fat rolls’ and that she doesn’t know what’s going on but our dresses creep up and sit up very high.”