How lockdown inspired Van Tonder to go for world record 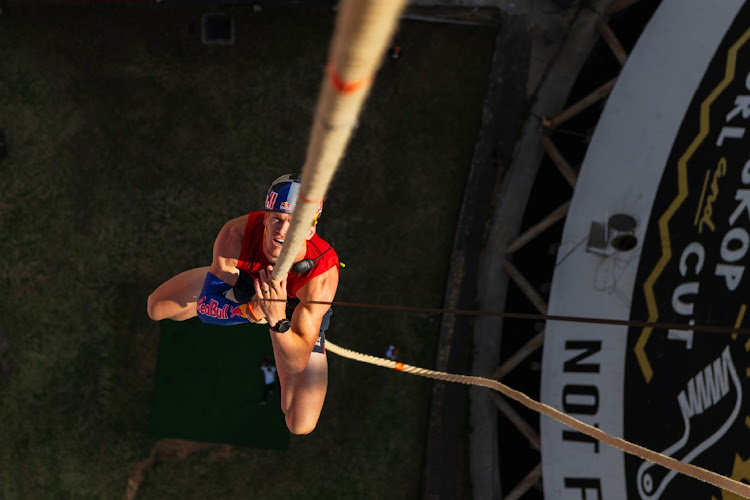 Months of strategising, planning and training all formed part of helping Red Bull Obstacle Course Racing (OCR) athlete Thomas van Tonder achieve his gargantuan goal of a 90m rope climb between one of Joburg’s most iconic landmarks, the Soweto Towers.

Van Tonder nailed the climb in 09:05 and in the process set an official Guinness world records title for the 50m rope climb of 03:19.688.

Van Tonder said: “Starting the attempt today with all the witnesses was amazing. Everything felt good, the rigging crew were on point and I fell into a good rhythm. I got to the 50m mark and I was able to lock into the rope and take a second to catch my breath and look at my watch. I knew then that I had achieved a sub-4min time, which for me was personally a huge goal to aim for.

“It was then that I realised I still had another 40m to climb. That last part was brutal, as I had spent a lot of my energy already on the first 50m section. I was battling with arm pump and trying to manage so as to not let my hands fail, but I made it to the top and seeing the team there waiting for me was an unforgettable moment.”

With South Africans going into lockdown in March this year, and all sports put on hold, it was a challenge for many athletes to stay motivated and to find ways to keep up with their training. For van Tonder, a world champion in OCR, a sport that requires a lot of training outdoors and using various obstacles, it was important to find ways to keep mentally and physically fit when going outdoors was not an option.

It was during this time that Van Tonder drew inspiration from British adventurer Ross Edgley and fellow OCR athlete Leon Kofoed to lay out a goal for the Guinness world record attempt rope climb.

Further to his training, Van Tonder also spent a lot of timing researching the right gear for the climb. Limiting weight was a key consideration when it came to choosing the harness and helmet.