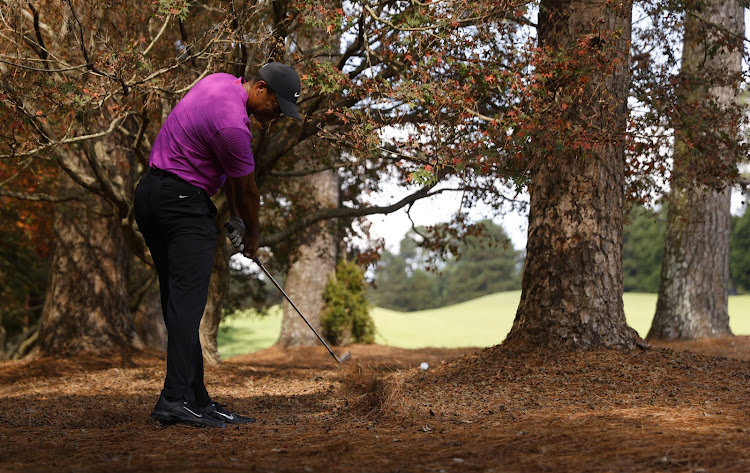 Tiger Woods entered this year's tournament with high hopes but found the wear and tear of playing extra holes to catch up after Thursday's weather-delayed opening round difficult to overcome.
Image: REUTERS/Mike Segar

Three of golf’s biggest guns had their ammunition spiked by rampant Dustin Johnson as Rory McIlroy, Brooks Koepka and Tiger Woods found themselves out of range after the third round at the Masters on Saturday.

McIlroy and Koepka were eight shots behind Johnson, the leader on 16-under-par 200, while Woods was 11 off the pace at Augusta National.

McIlroy needs the Masters to complete a career grand slam of all four modern majors, but he declared his 2020 quest as good as dead.

"I have zero thoughts about winning this golf tournament right now," said the Northern Irishman, who shot himself in the foot with an opening round 75, which he followed with 66 and 67.

"The good golf was in there, I just didn't allow myself to play that way on the first 18 holes," he added.

"I've always said I play my best golf when I'm trusting and freer, and I've been a lot freer over the last 36 holes."

Koepka, winner of four major championships in the previous three years - two US Opens and two PGA Championships - said he would just do his best on Sunday.

"You've got to shoot a low number. I think that's pretty obvious. Go out, go play good, see what happens," said the 30-year-old American, who is battling back from a knee injury.

Woods surprised the golf world last year with a stirring triumph for his fifth Masters crown and 15th major title.

He entered this year's tournament with high hopes but found the wear and tear of playing extra holes to catch up after Thursday's weather-delayed opening round difficult to overcome.

"These are long days," said 44-year-old Woods, who shot a 72, hampered by a surgically repaired back.

"It's just part of the deal. If you have long days like this, I'm going to get a little bit sore, which I definitely am.

"I can walk all day. The hard part is bending and twisting.

"I think that's part of the game, though, and so that's always been the challenge with my back issues and I guess will always continue to be."