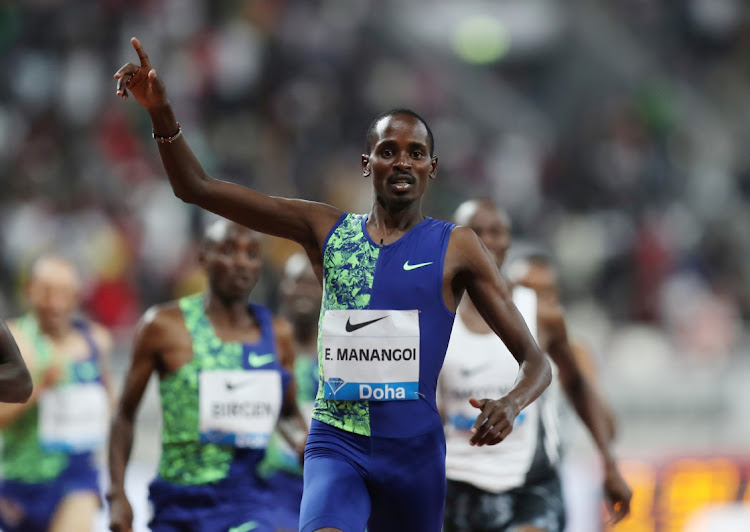 Kenya's Elijah Motonei Manangoi insisted he was "a clean athlete and I will be back on track and win right."
Image: REUTERS/Ibraheem Al Omari

Kenya's former 1,500 metres world champion Elijah Manangoi said he accepted the Athletics Integrity Unit's (AIU) decision to hand him a two-year ban for anti-doping violations but insisted that he was a clean athlete, according to a statement seen by Reuters on Saturday.

Manangoi, who will be ineligible to compete at next year's Tokyo Olympics, was provisionally suspended in July after missing three tests under whereabouts rules and the AIU said on Friday his ban would be effective from Dec. 22, 2019, which was the date of the third "whereabouts failure".

The ruling means the disqualification of all Manangoi's competitive results since then "with all resulting consequences, including the forfeiture of any titles, awards, medals, points prizes and appearance money", AIU said.

"I have received the verdict from AIU and as I sit here, I have acknowledged that I made a mistake on my whereabouts failures and I have accepted their decisions, though it will be difficult to forgive myself," Manangoi said in a statement shared by his coach.

"I'm a clean athlete and I will be back on track and win right."

Caster Semenya puts aside controversy to win women's 1,500m and break her own South African record time.
Sport
2 years ago

The 27-year-old Manangoi won the world title in 2017 in London and bagged gold at the Commonwealth Games a year later. A stress fracture prevented him from defending his world crown last year.

The AIU said on Friday that Manangoi had accepted the punishment for his violation and waived his right "to have those consequences determined by the Disciplinary Tribunal".

The SA Institute for Drug Free Sport (Saids) has confirmed that former Springboks hooker Mahlatse “Chiliboy” Ralepelle has lost his appeal against an ...
Sport
5 months ago

SA Institute for Drug Free Sport (Saids) chief executive officer Khalid Galant has confirmed that a decision on the doping hearing of former ...
Sport
5 months ago

Two SA athletes‚ including one of the country’s top female sprinters‚ have been banned for four years after testing positive for anabolic steroids‚ ...
Sport
5 months ago
Next Article