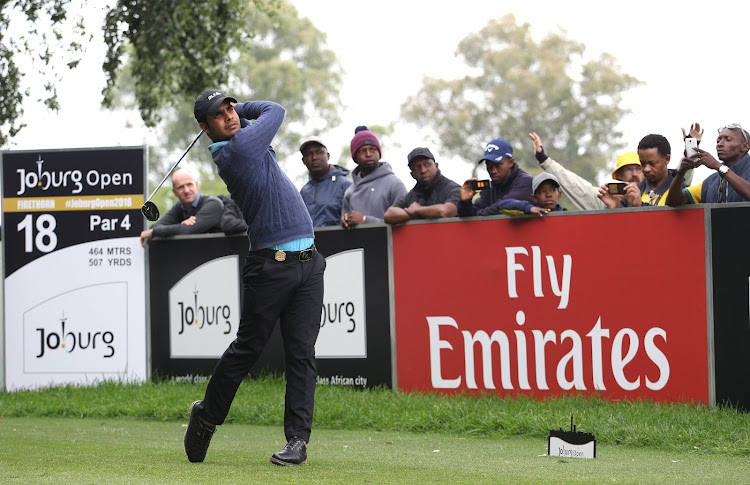 Shubankar Sharma of India plays shot on the 18th hole during the completion of the final round of the Joburg Open at Randpark Golf Club on December 11, 2017 in Johannesburg.
Image: Luke Walker/Getty Images

The dark days of lockdown just won't recede but the first rays of light on the Sunshine Tour will come with the return of the Joburg Open next month.

The co-sanctioned Sunshine Tour and European Tour event which tees off at Randpark Golf Club on 19 November and carries a prize money pot of R19.5m‚ will mark the return of professional golf in this country.

It will be the first professional tournament in nine months after the easing of some Covid-19 restrictions.

The Joburg Open will return as a stand alone tournament for the first time since 2017 when the City of Johannesburg agreed to support the Sunshine Tour and absorb the event into the South African Open for the duration of the latter’s hosting in Johannesburg. That agreement has come to an end.

Details of the SA Open will be announced later this week but new Sunshine Tour commissioner Thomas Abt confirmed on Tuesday it will not be in Johannesburg.

He is expecting a strong field with almost half of the 156 competitors from the European Tour.

“The European Tour have to fill a field of 70. We have also sent out a letter to our international professional golfers that are Sunshine Tour members who play on the European Tour and the PGA requesting their support at the Joburg Open‚” said Abt.

Crucially‚ with the Masters being contested the week before‚ players don't have to got into quarantine but will have to live in a bubble for the week they are involved in the tournament.

There will be relief all round that professional golf‚ in particular the Joburg Open‚ is back.

The return of the tournament isn't just an opportunity for the professional to earn a buck.

“Since the inception of this tournament in 2007‚ our vision has been that the Joburg Open must benefit all the residents of Johannesburg‚” said councillor Geoffrey Makhubo‚ the executive mayor of the City of Johannesburg.

Selwyn Nathan‚ executive director of the Sunshine Tour expressed his gratitude to those who got the sport back onto the tee box.

“Without their commitment and support we will not be sitting here today and we will probably still have some 60 000 people out of work‚” he said about the number of people employed in the industry.

The tournament has an impressive list of winners with Charl Schwartzel‚ Branden Grace‚ George Coetzee‚ Andy Sullivan and Darren Fichardt all on the honours roll.

No spectators will be allowed at this year's event that will also feature a ProAm.