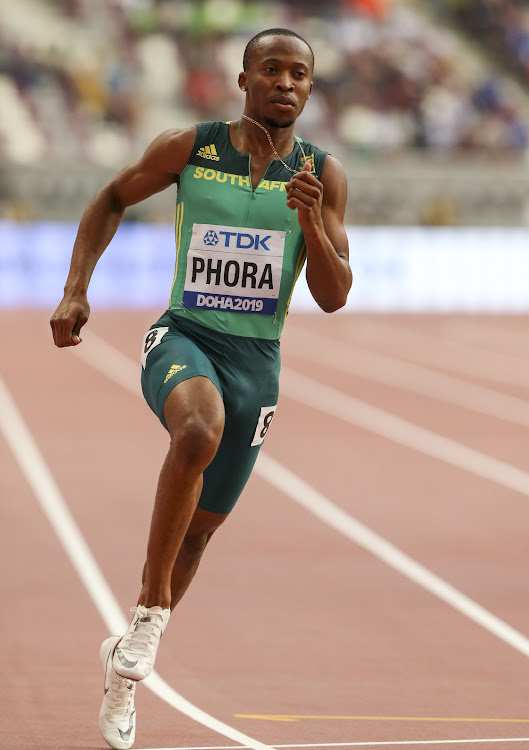 The biggest lesson that SA sprinter Thapelo Phora learnt from the Covid-19 pandemic is that you must never rely on one source of income.

The 28-year-old father of one depends on athletics to earn a living. But the 400m African Athletics Senior Championship silver medallist is stuck at his home in Mamelodi with no source of income. He trains at the University of Pretoria High-Performance Centre.

Phora, who won a gold medal with Team SA in the 4x400m relay in Asaba, Nigeria in 2018, is coached by Nico van Heerden at the university. After the university closed due to the virus, the athlete went back to the township to train there.

The modest athlete received a payout from sports minister Nathi Mthethwa’s Covid-19 relief fund in July. Phora, who has no sponsor, says that is the only income that he got this year as he was unable to race due to the pandemic.

“My biggest lesson that I’ve learnt from the virus is that one cannot rely on athletics only. I want to be a fitness trainer. I have nice biceps and muscles but I’m not using them to make money. I should have thought about this long time ago,” said Phora, who registered for a fitness training course in college.

I’d give anything to run competitively again - Munyai

“It’s been a tough year. The university closed and on the other hand, I don’t have a sponsor. I don’t receive a stipend from anybody. I regret not furthering my studies as I rely on athletics to support my child. The virus has given me a reality check and I want to start a business. I will complete my studies in six months,” he said.

Phora’s idol is 400m Olympic record holder Wayde van Niekerk, and he wants to emulate him by finishing on the podium at the Olympic Games in Tokyo, Japan, next year. He lost out on appearance fee money, by being unable to compete in the European season.

If he manages to get his life back on track, Phora plans to invest his earnings. “They pay in dollars in Europe. I want to buy a few buildings and rent them out in the future when I get the opportunity to make money again. When you compete in Europe, you make good money and that is what I missed out on this year. It saddens me that I am stuck in Mamelodi,” said a disheartened Phora.

He says the US and other overseas federations take care of their athletes, but Athletics SA (ASA) does not. “Even if you don’t have another job, in Europe athletes are taken care of, but ASA did not even give us a relief fund or emergency funding,” added Phora.