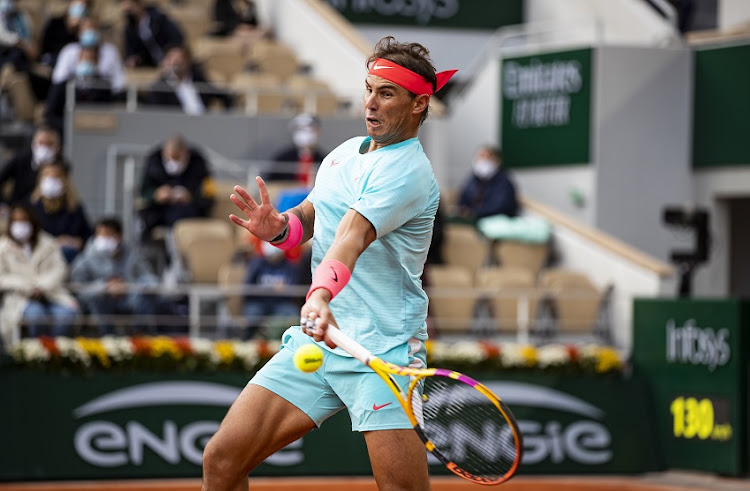 Rafael Nadal of Spain hits a forehand against Diego Schwartzman of Argentina in the semi-finals of the men’s singles at Roland Garros on October 09, 2020 in Paris, France.
Image: TPN/Getty Images

Rafael Nadal showed no sign of relinquishing his French Open crown as he suffocated Argentine Diego Schwartzman 6-3 6-3 7-6(0) in the semi-finals on Friday to move within one win of a record-equalling 20th Grand Slam title.

The Spaniard, also chasing a record-extending 13th triumph at Roland Garros, could clash with Novak Djokovic if the world number one beats Greek fifth seed Stefanos Tsitsipas in the second semi-final.

The 34-year-old Nadal, now undefeated in 13 French Open semi-finals, once again relied on his massive forehand to notch up his 10th win in 11 encounters with Schwartzman, who beat him at the Italian Open last month.

Nadal, who advanced into the Paris final without dropping a set for the first time since 2017, will equal Roger Federer's men's singles record of winning 20 majors if he triumphs on Sunday.

Schwartzman, the 12th seed, kept Nadal on court for over three hours but managed only 24 winners in the contest.

"With these conditions it's very difficult, and it's still incredible to be in the final again. Thanks to my team, my family. It's a beautiful moment for me," said Nadal, who has now progressed to the final without losing a set for the sixth time.​

"I know with Diego it’s very difficult until the end. He’s one of the players who makes more (service) breaks on the tour.

"A few weeks ago, I lost in Rome so I expected a very tough match. Happy the way that I played. I think I have been improving and today has been a very positive match for me."

All signs pointed to a tight encounter and a 14-minute opening game confirmed that Nadal would not have it easy in chillier conditions than usual, with the tournament having been postponed from its usual May-June spot amid the COVID-19 crisis.

The scoreline belied the intensity of the match, but Schwartzman missed too many opportunities to shake Nadal's confidence, converting only three of 12 break points.

Nadal, who now has a mind-bogging 99-2 win-loss record at Roland Garros, broke six times from nine chances, raising his level under pressure.

In the second set, he lost only four points on serve against one of the world's best returners.

Nadal broke early in the third set and Schwartzman, looking increasingly frustrated, seemed on the verge of collapse but the Argentine fought back to send the set into a tiebreak.

Nadal, who also produced an outstanding defensive performance, won a quick exchange at the net to move 2-0 up and never looked back.

Schwartzman, who was playing his maiden Grand Slam semi-final, found the net with a return on match point to allow Nadal into his 28th major final.