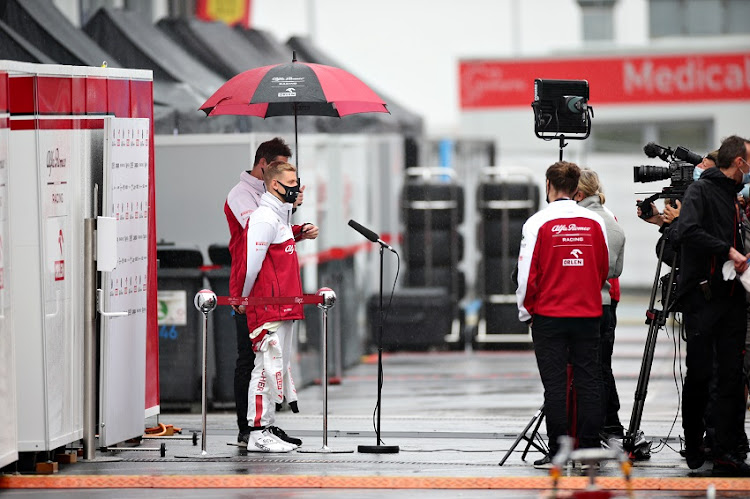 Mick Schumacher of Germany and Alfa Romeo Racing talks to the media in the Paddock after missing his chance to drive in FP1 due to a weather delay during practice ahead of the F1 Eifel Grand Prix at Nuerburgring on October 09, 2020 in Nuerburg, Germany.
Image: Peter Fox/Getty Images

Bad weather denied Mick Schumacher a Formula One practice debut at the Eifel Grand Prix on Friday, with the medical helicopter unable to take off due to fog and the opening session called off.

Organisers had set the clock running for the 90-minute session at a cold and damp Nuerburgring but kept the pit lane exit closed.

After two half-hourly updates, they announced there would be no running.

Schumacher, the Formula Two championship leader and son of seven-times world champion and former Ferrari great Michael, had been due to replace Italian Antonio Giovinazzi at Alfa Romeo for the opening session only.

The debut had attracted global interest, with Schumacher stepping onto the Formula One stage at the circuit closest to his father's childhood home in Kerpen and one where his father won five times.

Britain's Callum Ilott, second in the F2 championship and also a Ferrari Academy driver, had also been due to take part with the Ferrari-powered Haas team.

Schumacher and Ilott have both driven F1 cars before in test sessions.

"With the fog that's come in the medical helicopter is not able to take off and fly to the hospital. The distance by road is far too far should something occur."

The Nuerburgring is making its return to the calendar for the first time since 2013 after Formula One had to rip up its original schedule and bring in some new venues due to the COVID-19 pandemic.

The circuit situated in the hilly and wooded Eifel region has never before hosted a world championship grand prix this late in the year.