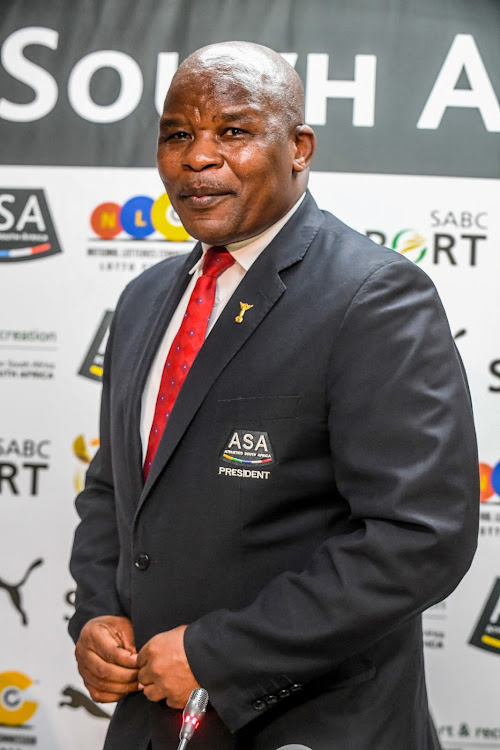 Aleck Skhosana (president of ASA) stands to show members of the media that he is eligible to Stand for SASCOC elections during the ASA press briefing about his SASCOC presidency candidacy at Athletics House, Houghton Estate on March 11, 2020 in Johannesburg, South Africa.
Image: Sydney Seshibedi/Gallo Images

Athletics SA (ASA) president Aleck Skhosana has been keeping a low profile since losing his position of acting president at the SA Sports Confederation and Olympic Committee (Sascoc).

Skhosana had gone underground after leading Sascoc for two months, while Barry Hendricks was fighting to clear his name. As Skhosana took office in the SA Olympic movement, Hendricks was attending a series of arbitration cases after he allegedly blocked former Tennis SA board member Ntambi Ravele’s Sascoc presidential nomination.

But Hendricks was cleared of conspiracy and reinstated back to his position as the Sascoc acting president. The elections for a new board and president will be held on November 7 at a venue still to be confirmed. Skhosana, who got the taste of how it feels to be Sascoc boss, will call a press conference this week to announce his plans for the elections.

“I decided to keep a low profile for a while, and did not want to draw myself into dirty tactics and politics. But I am back and this week, we'll get into the business of going after the hot seat in South African sports,” said Skhosana.

The vastly experienced sports administrator will unleash his election plans with the hope of convincing federations to vote for him. His presidential ambitions nearly suffered a huge knock when his submission was rejected for allegedly not including a letter of motivation from ASA. But he took the matter to arbitration, and he was allowed to contest the elections.

He is strongly of the view that there could be dark forces attempting to block his ambition to be the head of Sascoc.

“I did not warm the seat for anyone when I was acting president of Sascoc. That seat is vacant and is there for the taking... Now that I know the election date, I am preparing myself for the big day,” Skhosana said.

The South African Sports Confederation and Olympic Committee (Sascoc) want one thing and one thing only from Cricket South Africa (CSA): Unrestricted ...
Sport
1 year ago
Next Article