Reliance on Caster for medals indictment on ASA, track and rugby star feels

State of female athletics in SA saddens me - Conley 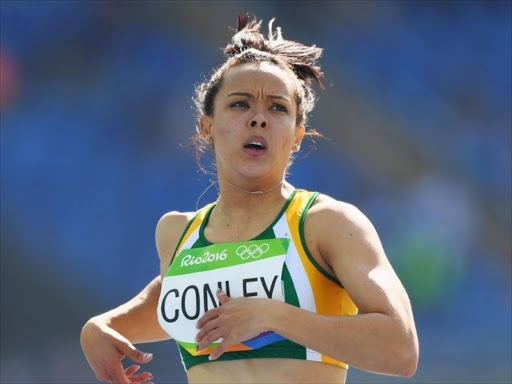 Olympic sprinter Alyssa Conley says that SA does not believe in female track and field athletes.

With Olympic 800m gold medallist Caster Semenya fighting for her athletics career, Athletics SA (ASA) is in danger of not producing a female medallist at the Olympic Games in Tokyo, Japan, next year.

Semenya lost her legal battle at the Swiss Supreme Court against the testosterone level rule that affects her eligibility to compete in world athletics events.

The International Association of Athletics Federations (IAAF) introduced a ruling that prevents female athletes with high testosterone levels from competing in 400m, 800m and 1500m events.

Conley, the 29-year-old sprint ace, has been missing from athletics after she shifted her focus to rugby for the Springbok Sevens team last year. She sympathises with Semenya and admits that the court verdict left her gutted.

Her plan to return to athletics this year were affected by the Covid-19 pandemic. But she says her focus is not on the Olympic Games in Japan. The 2017 100m and 200m SA senior track and field champion is eyeing her comeback in the 2022 Commonwealth Games in Birmingham, England.

Conley is an ambassador of the inaugural women in sports awards in Ekurhuleni, West Rand, and Johannesburg. She uses the initiative to promote and to develop young girls and women in sport.

“The state of female athletics in SA saddens me, and it's sad to see that the country does not believe in female track and field athletes. We must count on one person to bring in medals, and now that person might not be in Japan. ASA must go back to the basics and develop young girls. We want to see the next Caster and Wenda Nel.

"Female development in this country is dead. We will be lucky to have five female athletes in ASA’s Olympic team. ASA must embark on talent identification for young girls and groom them,” said Conley.

The Springbok Sevens team qualified for the Olympic Games. But the SA Sports Confederation and Olympic  Committee (Sascoc) does not recognise their qualification because it does not meet their qualifying criteria. The decision by Sascoc ended any hopes of Conley going to the Olympics in Japan. “I was hoping to become the first athlete to compete in two different sporting events at the Games,” she said.

She added that she does not intend to renew her contract with the Springboks Sevens when it expires in December to shift focus back to athletics.

Athletes can't wait to get back on track

SA's renowned athletics coaches Michael “Sponge” Seme and Jean Verster are hard at work preparing athletes for the potential return of the sport.
Sport
1 year ago

Athletics South Africa (ASA) says it will approach Sport minister Nathi Mthethwa to discuss the next step in the fight to have Caster Semenya allowed ...
Sport
1 year ago
Next Article