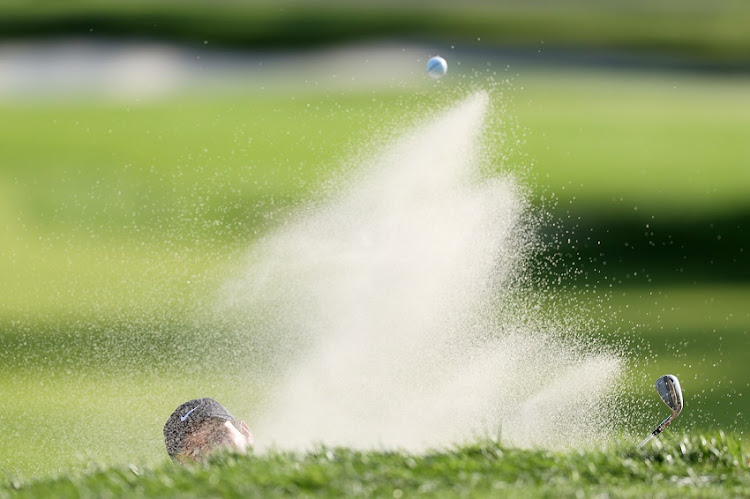 Patrick Reed of the United States plays a shot from a greenside bunker on the second hole during the second round of the 120th U.S. Open Championship on September 18, 2020 at Winged Foot Golf Club in Mamaroneck, New York.
Image: Gregory Shamus/Getty Images

Former Masters champion Patrick Reed put his sterling short game on display to grab the U.S. Open halfway lead on Friday while Tiger Woods finished well outside the cut in windy conditions that humbled many of the game's top golfers.

Reed only hit five fairways on a tough scoring day at Winged Foot but made a slew of stunning recoveries and needed only 25 putts en route to an even-par 70 that left him at four under on the week and one shot clear of Bryson DeChambeau (68).

"I feel like the game is where it needs to be. I feel good," said world number 10 Reed. "I just need to tighten a few things up here or there, but the short game is sharp, and when I play around a place like this, that's what you need."

Reed, who started the day one shot back of overnight leader Justin Thomas, grabbed the outright lead with a birdie on his final hole, the par-five ninth, where his shot from a greenside bunker settled five feet from the cup.

Unlike the first round when 21 players finished under par in soft conditions, Winged Foot proved a much sterner test on Friday as DeChambeau, Bubba Watson (69) and Hideki Matsuyama (69) were the only players from a 144-player field to break par.

DeChambeau, who has turned heads this year with his new physique and prodigious length off the tee, went out in the morning wave and muscled his way around a scorecard-shredding Winged Foot course like few others can.

The world number nine finished his round with a monstrous eagle at the par-five ninth hole where, after a 380-yard drive, he stuffed a pitching wedge to six feet.

"Confidence is at an all-time high right now, driving it well, iron play is fantastic, wedging is getting better each and every day, and I'm putting it like I know I can," said DeChambeau, whose best major finish was a share of fourth place at this year's PGA Championship.

Thomas (73), Spain's Rafa Cabrera Bello (70) and Harris English (70) were all two shots off the pace heading into the weekend of a tournament that was originally scheduled for mid-June but postponed because of the COVID-19 pandemic.

Masters champion Woods (77) missed the cut for the eighth time in his last 15 majors after a round during which he made five bogeys and two double-bogeys over a miserable 11-hole run.

"Physically it was frustrating that I didn't drive the ball as well as I needed to," said Woods.

"Iron play was pretty much the way it has been. It's been good, and I finally putted well. But on this golf course it's imperative that you hit fairways, and I did not do that."

Phil Mickelson's latest bid to complete the career Grand Slam of golf's four majors fell apart as the six-times runner-up carded a 74 and missed the cut after posting one of the worst 36-hole scores of his major career.