Tree of hope from Japan arrives in SA 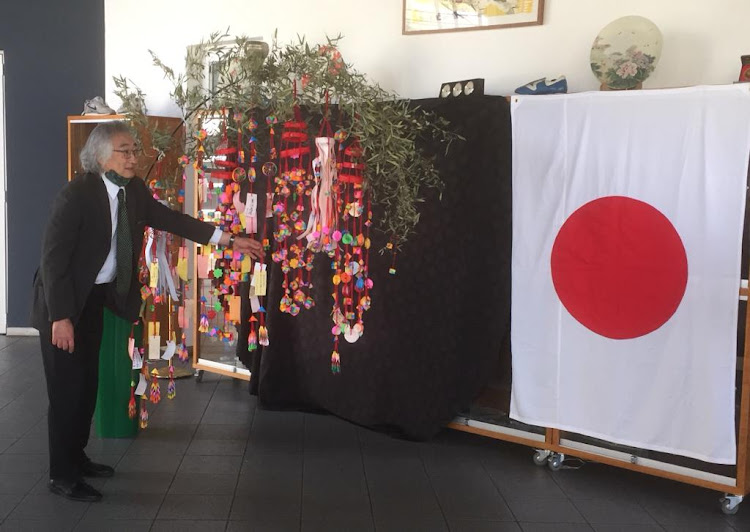 Shuichiro Kawaguchi, deputy head of mission of the Japanese embassy, explains the significance of the decorated bamboo plant at Sascoc on Thursday.
Image: David Isaacson

The messages of encouragement travelled nearly 14‚000km from Iwanuma city in Japan to Johannesburg‚ but South African sports fans will be able to relate to most of them.

“I wish I can score a goal in a soccer match‚” wrote Toma Furukawa‚ one of many youths whose messages adorn a bamboo tree handed to the SA Sports Confederation and Olympic Committee (Sascoc) by a Japanese delegation on Thursday.

The bamboo plant is part of the Tanabata tradition‚ where trees are decorated with orizuru‚ the art of paper cranes folded from origami paper‚ as well as threads called fukinagashi and coloured paper strips for people to write their wishes.

The overall message is that everyone overcome the Covid-19 pandemic so they can meet at the postponed Olympic and Paralympic Games in Tokyo next year.

“Good luck for soccer matches!” wrote Dan Ishikawa‚ while Tokiko Kobayashi offered: “Pull yourself together in this pandemic and I wish you a great success in the Olympic Games.”

The missive from the Iwanuma soft tennis association — which uses a ball softer than regular tennis and is popular in Japan at age-group level — was: “Believe in yourselves and win many gold and silver medals!”

Deputy head of mission at the Japanese Embassy‚ Shuichiro Kawaguchi‚ explained all the sports bodies that wrote messages were youth organisations.

The coastal city of Iwanuma‚ some 350km north of Tokyo‚ was badly hit by the earthquake-triggered tsunami of 2011.

“Let’s hold our hands‚ skills and hearts together for world peace‚” was the note from the Iwanuma softball association.

Toshiaki Katoda factored SA into the cosmic relevance of Tanabata‚ which is based on a fable where a princess and her husband could cross the Milky Way to meet only one day a year. “I hope [the] star of South Africa will shine bright in the sky of Tokyo.”

While there has been speculation that the Games next year could be cancelled‚ there was quiet confidence among those at the handover that the Olympics and Paralympics will proceed after all.