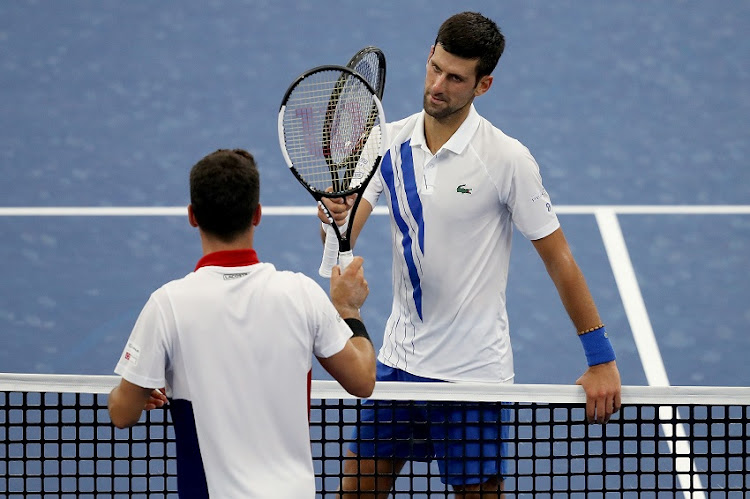 Novak Djokovic of Serbia is congratulated by Roberto Bautista Agut of Spain after their semifinal match during the Western & Southern Open at the USTA Billie Jean King National Tennis Center on August 28, 2020 in the Queens borough of New York City.
Image: Matthew Stockman/Getty Images

Spaniard Roberto Bautista Agut has hit out at tournament officials for their decision to close the roof during the second set of his semi-final defeat to Novak Djokovic on Friday in the Western & Southern Open in New York.

Bautista Agut won the opening set and was about to serve at 4-5 in the second when organisers decided to close the roof of the Louis Armstrong stadium during the changeover, anticipating rain.

The world number 12 lost his serve immediately as Djokovic drew level in the match and then carved out a 4-6 6-4 7-6(0) victory to avoid a third straight loss against the Spaniard.

"Everybody knows that they could wait a little bit, no? It was an unfortunate decision," the 32-year-old Bautista Agut told reporters. "It's not the first time I disagree with Lars Graff (ATP supervisor). I think it was not great and it was 100% wrong."

Bautista Agut said the break disturbed his rhythm and he also had problems with his ball toss while serving in the first game under the closed roof.

"I totally disagree with the decision he took, and for sure it was not great because he broke my rhythm," he said. "So the roof break could wait a little bit to finish the set because to close the roof, it's five minutes."

World number one Djokovic, who has struggled with a neck injury during the tournament, received assistance from the physiotherapist during the second set and later said his opponent was the better player on Friday.

While Bautista Agut rued the missed chance to stop Djokovic from winning his 22nd straight match this year, the fact that he was two points away from a win while serving at 6-5 in the decider should give him confidence ahead of next week's U.S. Open.

"I played really good matches this week, and I was serving for the match against the No. 1," Bautista Agut said.